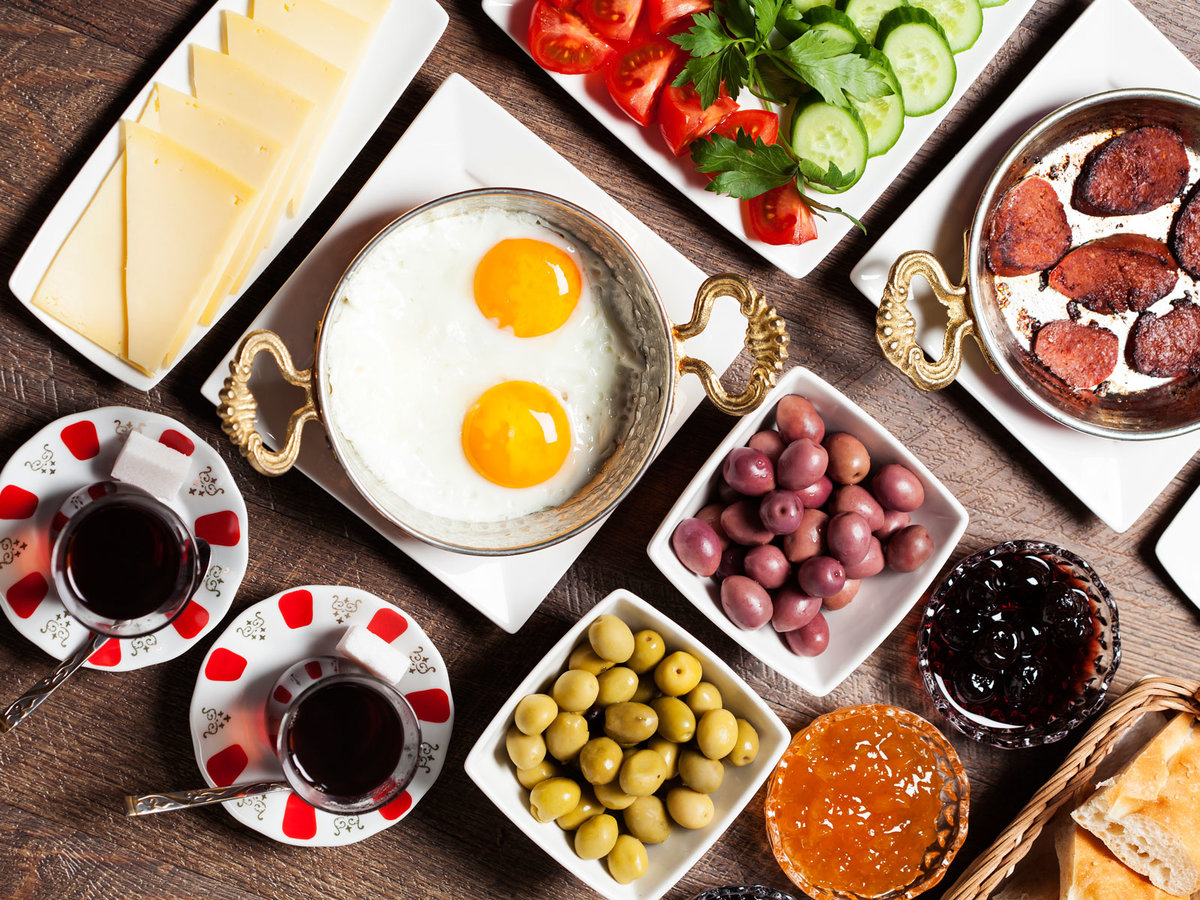 For Americans, brunch is the great equalizer. It’s where the hungover mingle with the early-birds, all in the noble pursuit of shelling out $13 or more for a tiny plate of waffles. It comes with its own set of rituals, like patiently pausing for the friend who needs to photograph her plate, and calculating how much alcohol you can drink without surrendering your Sunday to a state of unyielding misery.

For Turks, kahvalti (breakfast) happens every single day of the week, and it’s just as much a ritual on Wednesday as it is on Sunday. It’s why I wasn’t allowed to grab a Pop Tart on my way to school (and cereal was never an option)––I ate a little bit of cheese, a little jam, eggs and a few olives before my mother would send me on my way. On weekends, the spreads became even more decadent, and we would often go through several pots of tea before the pide bowl was empty.

Now, as an adult, kahvalti feels like a consolation prize for the weekday grind––you put on pants and rode the subway today, so you deserve a decadent breakfast. Turkish kahvalti doesn’t promise to make you a morning person, but it does stand a very good chance at helping you make it through the day. Here’s a guide on how to make your own spread, even if you can’t make it to Istanbul.

My Big Fat Greek Wedding does a great job of expressing how important meat is for Greeks, and, incidentally, Turks. As a Turkish person, I can also confirm that cheese is A Very Big Deal. Feta cheese (beyaz peynir) is a true standby, and other contenders include Kasseri, a hard cheese made from unpasteurized sheep milk, as well as lor, an uncured goat’s cheese that’s like Turkey’s version of cottage cheese. (My personal favorite is a cheese from Erzurum that comes in long stringy pieces called civil peyniri.) Bear in mind that a real Turkish breakfast spread won’t just have one of these, but at least two or three; the goal is to sample as many flavors as possible.

Simit is the real star of the kahvalti spread; it’s the ideal canvas for your cheeses and jams. The doughy, sesame-seed-coated rings are often sold on street corners, inside subway stations and at virtually every bakery in Turkey. Typically, the Turkish bagel is ripped into smaller pieces and dipped into cheese or jam. For many people, simit is the perfect portable breakfast, as it’s so readily available and rarely costs more than a few Turkish lira. Pide, which is the traditional bread option: fluffy squares of dough coated in seeds. Delicious.

Black olive spread is a popular option on pide, if you’re the kind of person who likes something salty and savory early in the morning. For those looking for a sweeter option, drizzle pekmez, or molasses, on top of a thin coat of tahini. Because hazelnut is a key export, Turks are also really into hazelnut spreads—and yes, that includes Nutella.

As for jams, most grandmothers spend half the year sourcing the best fruits from their greengrocers; the rest of the year is spent canning and preserving until grandchildren come by to take the spoils home with them. Sour cherry, apricot, and fig jams are classic options, and my favorite is a beautifully fragrant bergamot jam.

It’s not right to talk about eggs without talking about sucuk, which is a dried, spicy beef sausage. Sucuklu yumurta, or, eggs with sausage, is the Turkish person’s answer to “I have nothing in my fridge,” or, “I burned dinner into oblivion.” It’s also a breakfast favorite, and the best part is dipping little pieces of pide bread into the spicy oils left behind from frying the sausage. If you’re a vegetarian, menemen is going to be your preferred alternative, which is scrambled eggs with bell peppers, tomatoes and scallion, doused in oregano. Carnivore who could do with a veggie or two? It’s not unheard of to prep a kahvalti spread that has both options.

Drinks come last because it might be difficult for brunch-loving Americans to stomach: The traditional Turkish breakfast doesn’t include alcoholic beverages, and it doesn’t always include coffee, either. Turkish tea (black, always––you’ll find herbal teas in restaurants, but most Turks reserve herbal and green teas for bedtime) is the way to go if you’re looking to replicate an authentic experience.