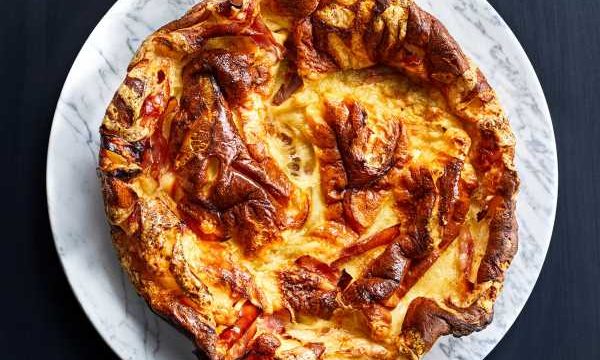 As much as I love the idea of piping-hot pancakes on the weekend, I rarely want to stand by the stove long enough to produce a structurally unstable, Jenga-like tower of them—and keep them warm in a low oven. The big puffed pancake called the Dutch baby is supposed to solve this problem, since you’re baking the batter in a cast-iron skillet instead of pan-frying it in portions. But then I was forced to face facts. The batter for a Dutch baby is usually thinner than the one for pancakes, since a Dutch baby is actually just one oversized popover. If a Dutch baby is going to feed four, it needs reinforcements.

That’s why I’m turning to this Polenta Dutch Baby with Ham and Swiss from the February 2020 issue of Food & Wine. Think of it as a burly Baby that’s taken a trip to Paris and come back dreaming of Croque Monsieur.

A couple of spoonfuls of uncooked polenta-style cornmeal add heft to the thin popover batter. Just be sure to make the batter at least 2 hours in advance of making your Dutch baby so that the gluten in the batter relaxes and the flour fully hydrates, ensuring a tender texture. Me? I’m popping that batter in the fridge the night before because measuring flour before I’ve had my coffee in the morning doesn’t sound like fun.

Fire up your skillet

When your batter (and you) are suitably well-rested, you’re ready to get cooking. Sizzle butter in one of those cast-iron skillets until just starting to turn brown to give the whole dish a dose of nutty flavor. Then give the batter one last stir and pour it into the pan, sprinkling in thin strips of ham and shreds of Gruyere around the border to create the addictive flavor profile of a classic ham-and-Swiss sandwich in a whole new piping-hot, puffed iteration. No ham or Swiss on hand? You could easily swap in thinly sliced bacon and/or another variety of grated cheese (I’d skip the high-moisture ones like mozzarella, though).

Whip up salad while the Dutch baby bakes

Salad for breakfast? Some folks would look askance at that. But salad for brunch? Totally legit. While the Baby’s in the oven, the recipe has you toss together a simple salad with a mustardy vinaigrette—just the thing to cut through the richness of your ham-and-cheese pancake and make it into even more of a meal, without having to deal with the drudgery of repeat pancake batches. And best of all, you get a glorious contrast between cool, crunchy salad and a giant pancake fresh from the oven. Set that skillet on your dining table, and dig in with a few forks and people that you’re willing to share it with.

Get the recipe: Polenta Dutch Baby with Ham and Swiss