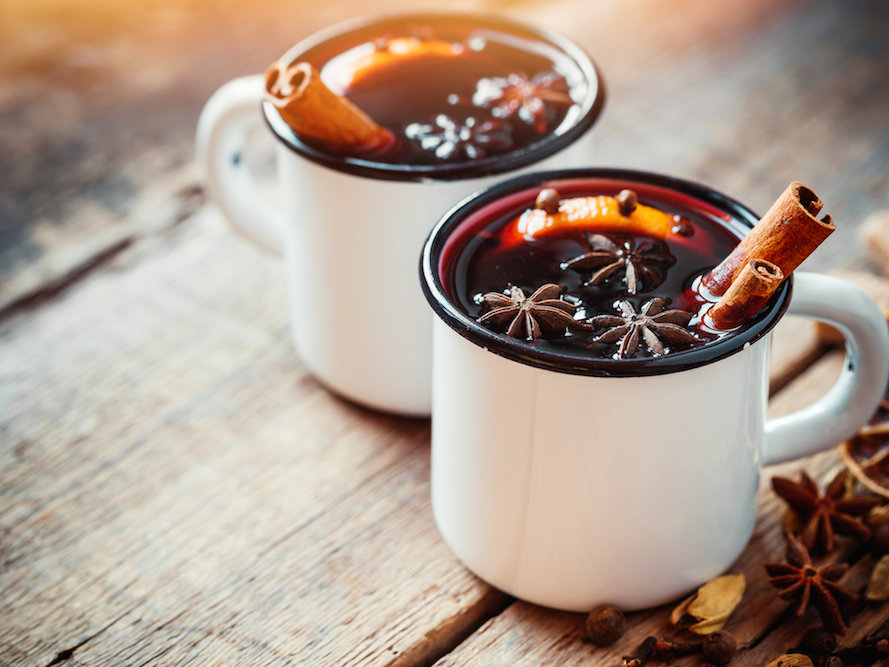 If you’re the type of person who not only has an office sweater but an office blanket, or who dreads the 30-second morning trek from your warm bed to a hot shower, or who has nobly suffered the restriction of wearing leggings under jeans, you probably appreciate a hot drink (if only to warm your ice-cold fingers). A hot boozy drink? Even better. That’s why we’ve rounded up 10 reader-favorite, warm-you-up cocktail recipes to memorize this winter, from whiskey-spiked hot chocolate and mulled wine to classic 19-century eggnog. Put on the kettle, and let’s get started.

A hot toddy is basically a shot or two of any potent spirit added to a cup of hot water. At Paley’s Place in Portland, Oregon, bartender Suzanne Bozarth puts a French spin on this warming drink with a slug of apple brandy, such as Calvados. It’s warming and tastes just like fall.

A hot toddy is basically a shot or two of any potent spirit added to a cup of hot water. At Paley’s Place in Portland, Oregon, bartender Suzanne Bozarth puts a French spin on this warming drink with a slug of apple brandy, such as Calvados.

Matt Lewis and Renato Poliafito of Brooklyn bake shop Baked firmly believe that homemade hot chocolate is superior to any commercial mix. They make their decadent version with both bittersweet and milk chocolate and then top it with homemade marshmallows (and a shot of Jack Daniels).

“It may seem like a bit of a nuisance to make such a labor-intensive drink,” says John Gertsen of this classic 19th-century eggnog. “But at the end of a long shift there’s nothing better than a nice, hot Tom & Jerry.”

Red wine and kirsch (a brandy made from cherries) are the base for this delicious seasonal drink, which is laced with citrus and warming spices like cinnamon, cardamom and black pepper.

This double rum coffee is deliciously flavored with cinnamon and orange zest.

Jon Santer of Oakland’s Prizefighter bar grew up near Medford, Massachusetts, which once produced much of the rum in the United States. “When I think about rum drinks I think about New England fall flavors like apples and mulling spices,” he says about this hot toddy.

Distiller Sebastian Reaburn loves lemon and butter together (“they’re yummy and rich”), and this drink is one of his favorite incarnations of the pairing. “It’s like a hot buttered rum mixed with a lemon tart. The citrus pieces get softened by the heat and mellowed by the sugar and butter; they’re delicious to nibble on at the end of the drink.”

Chef Ken Oringer of Toro in New York and Boston preheats the Thermos he uses to transport his deliciously spiced cider by filling it with boiling water and letting it sit for a few minutes. Pouring the mulled cider into a Thermos that’s already warm helps keep the drink hot.

For this warm, boozy nightcap, feel free to use a blend of whole spices or go out and buy a chai spice mix.