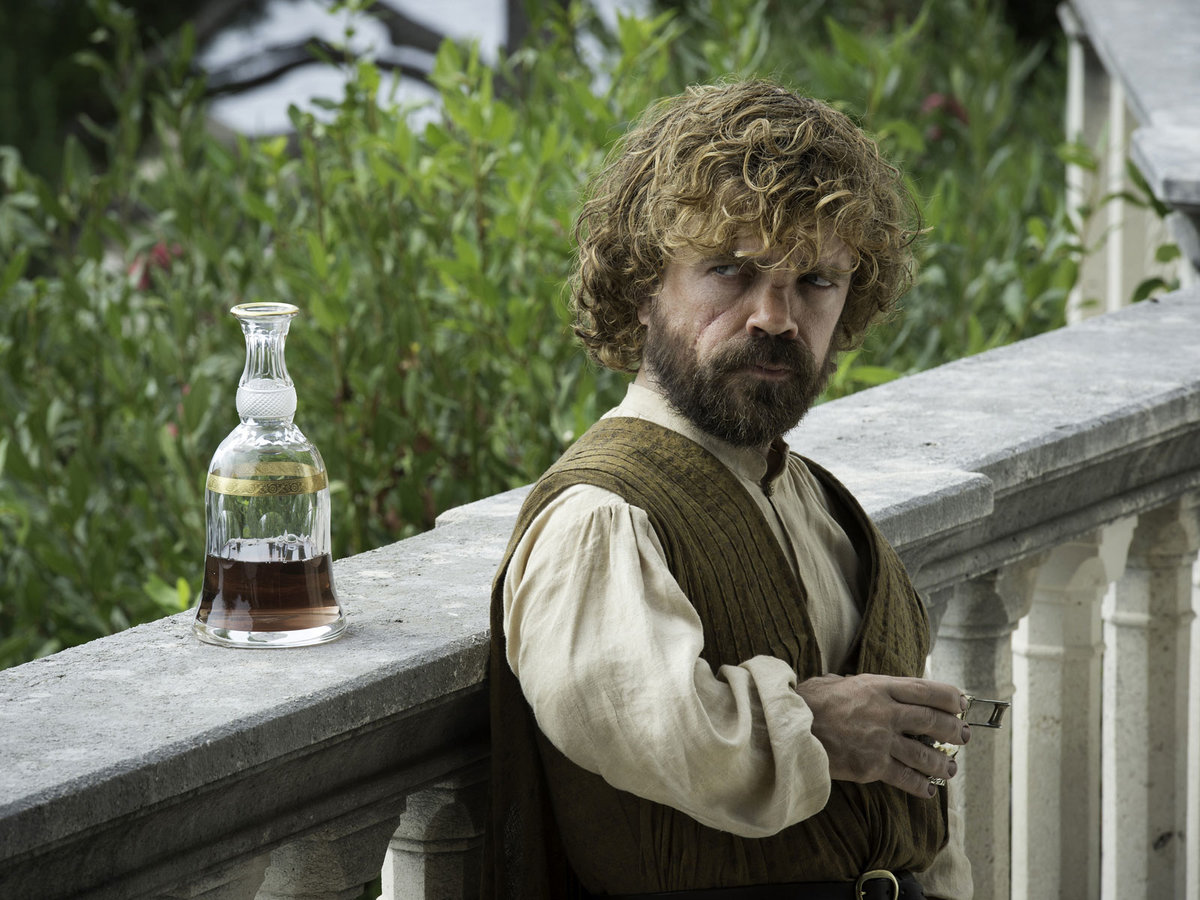 When the final season of Game of Thrones finally arrives during the still-vague time period of the first half of 2019, the return is sure to cause mixed emotions: After well over a year of waiting, fans will certainly be overjoyed, but sadness is sure to kick at the realization that the series is coming to an end. Luckily, alcoholic beverages pair well with both joy and sadness, and since the show debuted back on April 17, 2011, we’ve seen a mind-boggling number of official GoT-inspired beers, wines, and spirits hitting the market.

Adding to that list, this week, White Walker by Johnnie Walker officially reached retail—along with the announcement of eight more single malt Scotches to come. For those looking to send Game of Thrones out with a bang, here’s a list of all the Game of Thrones’ booze that has been released or announced up until this point—as well as your odds of obtaining it.

Iron Throne Blonde Ale (released March 2013): The first official GoT beer released by New York’s Brewery Ommegang launched in the lead up to Season 3. This easy-drinking blonde brewed with lemon peel and grains of paradise was re-released in September 2015, but is currently out of production/distribution according to the brewery.

Take the Black Stout (released September 2013): Ommegang’s second GoT beer, this 7-percent ABV stout was also re-released in September 2015. Though the brewery says the beer is currently out of production/distribution, strong stouts can sometimes age well, so if you are able to hunt down a bottle, this brew might still be drinkable today.

Fire and Blood Red Ale (released March 2014): The third GoT beer was an amber ale spiced with ancho chilies. The brew was re-released in October 2017 but is currently out of production/distribution.

Valar Morghulis Dubbel Ale (released October 2014): The fourth GoT beer was a Belgian style billed as being “delicately balanced with rich malty sweetness, caramel and just enough bitterness to balance out its malty backbone.” The brew was re-released with the October 2016 launch of Valar Dohaeris, but is currently out of production/distribution. However, once again, dubbels can sometimes age well, so an old bottle may still be enjoyable.

Three-Eyed Raven Dark Saison Ale (released April 2015): The first GoT beer of 2015, this brew was mysteriously billed as “a Dark Saison ale, a hybrid style open to brewer’s imagination” that is “neither a pure saison nor your typical dark beer.” The beer was never re-released and is currently out of production/distribution.

Seven Kingdoms Hoppy Wheat Ale (released April 2016): After a year wait, Brewery Ommegang returned with a sixth GoT beer that was a easier drinking Hoppy Wheat, a mix between a Belgain-style wheat (not unlike Blue Moon) and a hop-forward American ale. This beer was never re-released and is currently out of production/distribution.

Valar Dohaeris Tripel Ale (released October 2016): Based on a traditional Belgian style, this seventh GoT beer is a copper-tinted, 9-percent ABV tripel “with a bright sweetness thanks to the Belgian candi sugar” that finishes “moderately dry and effervescent with just a hint of Belgian yeast character.” The beer was never re-released and is currently out of production/distribution, but is likely still enjoyable today.

Bend the Knee Golden Ale (released May 2017): For its eight GoT brew, Ommegang opted for a huge 9-percent ABV Belgian-style beer brewed with pilsner malt and flaked oats and hopped with Saaz, Bravo, and Styrian Golding hops. The beer was never re-released and is currently out of production/distribution.

Winter Is Here Double White Ale (released October 2017): The ninth GoT beer, and last of 2017, is “an 8.3-percent ABV Belgian-style double white ale with the fearsome Night King emblazoned on the label.” The beer was never re-released and is currently out of production/distribution.

Hand of the Queen (released April 2018): Potentially realizing that keeping track of the previous nine beers was getting a bit complicated, in December 2017, Brewery Ommegang announced they’d be taking a slightly different approach in 2018 by incrementally releasing four beers throughout the year as part of a “Royal Reserve Collection.” The first one, Hand of the Queen, was an 11-percent ABV barleywine. Though Ommegang says you’re not likely to find this aging-worthy beer on store shelves in its 750-milliliter form, it will also be re-released in a mixed four-pack of 12-ounce bottles with the rest of the collection “just in time for the holidays.”

Queen of the Seven Kingdoms (released June 2018): The second beer in the Royal Reserve Collection was Queen of the Seven Kingdoms, billed as “an exceptional blend of Belgian sour ale and Belgian-style blonde ale” brewed in honor of Cersei Lannister. Ommegang says it’s likely still available in some areas, and BeerMenus.com shows plenty of places selling the brew. That said, it will also return as part of the aforementioned holiday mixed-four pack.

Mother of Dragons (released September 2018): The third beer in the Royal Reserve Collection is an interesting mix of smoked porter and Belgian kriek, or a smoky dark beer mixed with a tart cherry beer. It’s currently in stores now, but will also return as part of the holiday mixed-four pack.

King in the North (scheduled for November 23, 2018): In August, Brewery Ommegang announced the plans for its final release in the four-part Royal Reserve Collection and its final Game of Thrones beer of 2018. King in the North will be a massive barrel-aged imperial stout intended as a tribute to Jon Snow. The brew will appear on its own in a 750-milliliter bottle with a suggested retail price of $12.99, or if you missed any of the other Royal Reserve beers, all four will be sold together as “a one-of-a-kind gift pack, just in time for the holidays.”

As a side note, all beer availability information comes directly from the producer, Brewery Ommegang, but that doesn’t mean you might not be able to find these beers either hidden away on store shelves or through the secondary market.  Keep in mind that some beers age much better than others—specifically, high ABV beers are more likely to age well—so buy older bottles at your own risk!

Game of Thrones Chardonnay (released March 2017): Why should beer have all the GoT’s fun? In 2017, the Santa Rosa, California-based brand Vintage Wine Estates released three official Game of Thrones wines. The 2016 Central Coast Chardonnay is still on sale today for $19.99.

Game of Thrones Red Blend (released March 2017): Released simultaneously to the Chardonnay, this Red Blend for Paso Robles is a mix of six red varietals, “predominately Petite Sirah and Zinfandel.” Multiple vintages have apparently been released, and the 2016 is currently being sold for $19.99.

Game of Thrones Pinot Noir (released June 2018): Arriving over a year after the first set of Game of Thrones wines, Vintage Wine Estates apparently still saw some life in the GoT wine market. This 2016 Oregon Pinot Noir is once again on the lower range of the line’s pricing, coming in $19.99, and is still on sale.

White Walker by Johnnie Walker (released October 2018): Well-known Scotch producer Johnnie Walker teased this official boozy collaboration with HBO back in May, and it’s finally hit the market. This unique blend is billed as featuring “single malts from Cardhu and Clynelish—one of Scotland’s most northern distilleries where whiskies have endured long Scottish winters, not dissimilar to the climate north of the wall,” resulting in “notes of caramelized sugar and vanilla, fresh red berries with a touch of orchard fruit and is best served chilled—the Night King would have it no other way.” The bottling is billed as “limited edition,” but since it’s just been released, finding one of the $36 bottles (suggested retail price) shouldn’t be too tough.

The Game of Thrones Single Malt Scotch Whisky Collection (scheduled for November 2018): As if one blended Scotch wasn’t enough, when White Walker was released, Johnnie Walker also announced the brand would be nonupling-down with eight additional single malt Scotches, all new to the U.S., bottled in tribute to Game of Thrones. This “Game of Thrones Single Malt Scotch Whisky Collection” features releases from eight different distilleries under the umbrella of the international drinks giant Diageo, each with “their own unique characteristics” which were apparently used when choosing which of the Houses of Westeros to name them after. As of October, specific details have not yet been released, but here’s all the info we know: