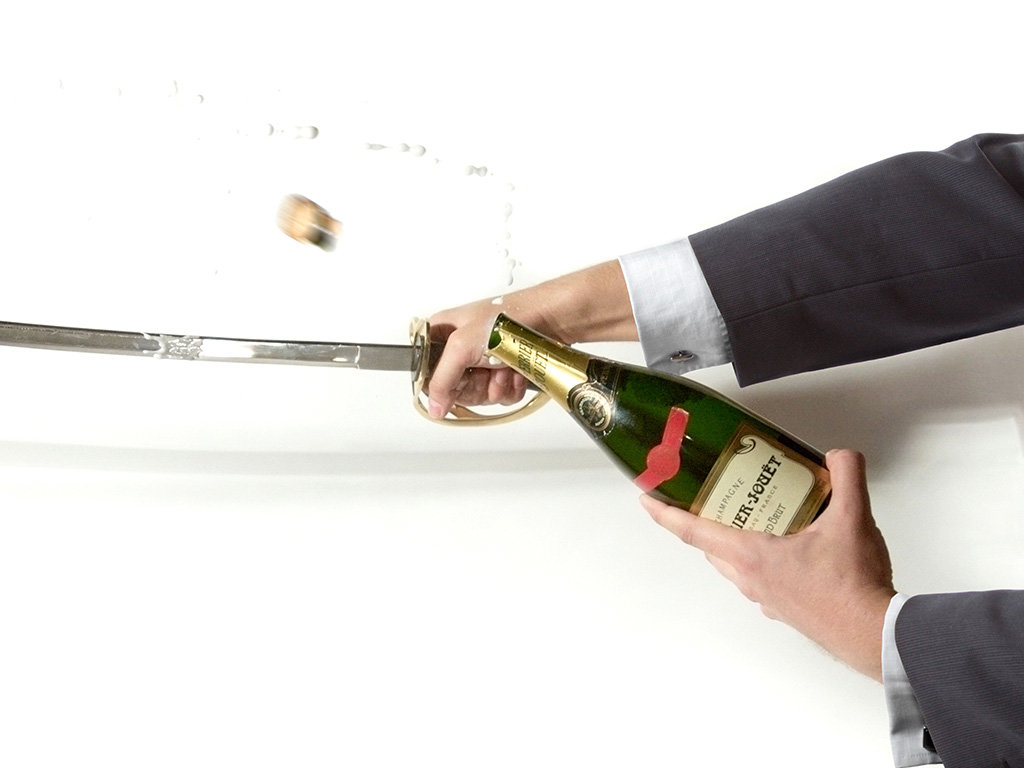 This piece originally appeared on VinePair.com.

The first time you see someone sabre a bottle of Champagne a series of thoughts run through your mind:

So who was the ‘genius’ to first sabre a bottle of Champagne? You may have heard it was Napoléon Bonaparte who first put sword to bottle, back in the days following the French Revolution. Or perhaps it was the officers in his cavalry – celebrating some great victory by bashing open a bottle of bubbly atop a horse. Maybe you heard the alternate version of that story, that following a defeat in battle, a bitter solider cleaved the head off a Champagne bottle to drink away his misery. After all, it was Napoléon who (supposedly) said:

“Champagne! In victory one deserves it; in defeat one needs it.”

A more romantic twist involves those same officers and Madame Clicquot, the young widow who had inherited her husband’s Champagne house when she was twenty-seven.Are any of the stories you might have heard true? Perhaps none of them are. Perhaps they all are – in other words, no one person invented sabering. If that’s the case then you can embrace the origin myth that you like. Champagne is steeped in traditions and myths that contribute to the undeniably celebratory mood that popping a bottle of bubbly inspires. Just because Dom Pérignon didn’t actually ‘invent’ Champagne, by accident no less, doesn’t make the story any less magical, especially his quote:

“Come quickly, I am drinking the stars.”

When a new ship is launched, we christen it by smashing a bottle of Champagne on its hull. We do this for good luck. Why? Because there’s something in the bubbles that is truly magical, something does inspire us to celebrate. On that note let’s explore the wonderful legends of Champagne Sabering.

The Hussars of The Napoleonic Wars

The Napoleonic Wars followed the French Revolution of 1789. Napoléon Bonaparte took power in France, a decade later. Within a few years he was fighting all across the European continent. The Hussars, light cavalry mounted on fast horses, were a symbol of the early, seeming invincibility of Napoléon’s armies. These lavishly dressed young soldiers slung Pelisses – short fur-trimmed jackets – over their shoulders. They armed themselves with carbines, and more famously, brass hilted sabers.

As these young soldiers rode home after a string of early victories, the legend goes that the townspeople would toss them bottles of Champagne. Still atop their horses, the hussars would have had difficulty opening the foil-wrapped cages and pulling out the corks. The solution? A swift stroke of the sabre blade to the neck of the bottle. Combine the mass conscription of the French populace (particularly young men) with the feverish dreams of empire that Napoléon’s early victories inspired and the image of the dashing young Hussar slicing open a Champagne bottle astride his horse comes into focus.

Of course Napoléon’s early victories gave way to an eventual defeat. While his armies lost their last battle at Waterloo in June of 1815, his doomed march into Russia three years earlier is equally infamous. Perhaps it was somewhere in the frozen ruins outside of Moscow that the alternative version of this story was born. With hundreds of thousands of their fellow soldiers dead or captured, this would certainly have been the sort of defeat where a man “needed” Champagne. And, courtesy of another legend, Champagne was available, despite the scorched earth tactics of the Russian army:

(Charles-Henri Heidsieck) famously rode on a white stallion in 1811, just ahead of Napoleon’s advancing army, all the way to Russia as a publicity stunt. Master promoter, he arrived in Moscow with cases of Champagne and his order book.

We’re not going to dive into the politics of the French Revolution, but trust us when we say that life for aristocrats changed quite a bit when Louis XVI and Marie Antoinette’s heads rolled off. The Reign of Terror ultimately gave way to Napoléon’s new French Empire. It was in this dangerous environment that we find Barbe-Nicole Ponsardin, better known as Madame Clicquot. The wealthy daughter of an aristocratic family – who had ties to Napoléon – she married François Clicquot when she was 21.

François Clicquot’s family was involved in a number of businesses, including the production of Champagne. When he died six years later, Madame Clicquot, now Veuve or ‘widow’ Clicquot took control of the company. After some wrangling with her father-in-law, she secured a fresh investment that allowed her to focus solely on Champagne production. This decision proved to be an excellent one, as she turned out to be a skilled winemaker, though it took a number of years before she achieved true success. Under her guidance, the company developed the process of riddling, which is why the Champagne you drink today is crystal clear.

Her husband died in 1805, in the early years of the Napoleonic Wars. When Napoléon’s soldiers came through Reims, in Champagne, they found a wealthy young widow who was running her own Champagne business. The story goes that she would entertain Napoléon’s officers in her vineyard, handing out bottles of Champagne to the men as they mounted their horses and left for battle. The officers, hoping to catch the eye of the wealthy young widow, unsheathed their sabres, and still astride their horses, lopped the tops off the bottles.The story is quite romantic – though we tend to believe that the shrewd Madame Clicquot was entertaining the soldiers purely out of self-interest. That is, if she was entertaining them at all. Madame Clicquot’s first renowned vintage was in 1811, toward the end of the Napoleonic Wars. Whatever the case, the widow seemingly was not impressed by these antics as we know her, and her famous Champagne house as Veuve Clicquot for she never remarried. She did however, survive the wars and go on to build a global Champagne empire.