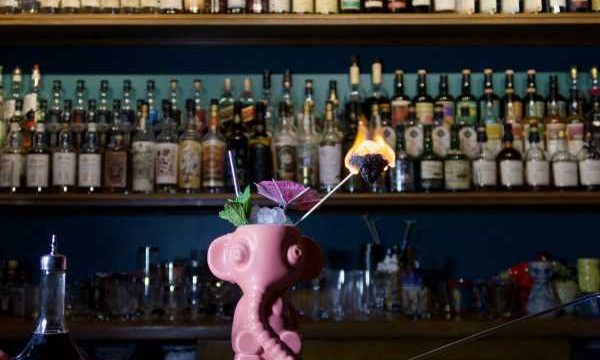 Old Lightning is “just a bar,” says Moix, “but … you have the very unique opportunity to try [spirits] you could not otherwise try at any other bar or restaurant.” For example, Old Lightning offers vertical pours of coveted Pappy Van Winkle’s Family Reserve 23 Year Old bourbon bottled in years 2013 to 2018.

Since its debut four and a half years ago, the intimate lounge has earned respect amongst drink enthusiasts for its impressive (and massive) collection of rare spirits: In 2016 and 2017, Old Lightning was nominated in the category of World’s Best Spirits Selection at global drinks festival Tales of the Cocktail.

Beyond stocking scarce spirits like Double Eagle Very Rare bourbon and Yamazaki 25 Japanese whisky, Old Lightning is equally beloved for its excellent, warm climate cocktails––centering its drinks list on the types of libations one would sip in places like the Caribbean and Latin America. And it’s here one will find five different daiquiri iterations.

So, what’s on the menu beside vintage bubbles? Surprise elusive spirits and a to-be-determined mix of six to eight tropical intoxicants, not to be confused with tiki drinks.

“In my opinion, New York has maybe too much tiki, and nothing tropical,” says Moix. So, future guests may have the opportunity to try Old Lightning’s take on Ti’ Punch, or the more unsung Old Sport, built from rye, rancio sec (a dry, oxidative-style French wine), pineapple gum, Peychaud’s Bitters and orange bitters.

On September 22 and 23, Old Lightning takes over lower-level Nolita bar Peppi’s Cellar, below Gran Tivoli, with reservations running from 5 p.m. to midnight via Resy. On September 24, Old Lightning will jump over to Hunky Dory in Crown Heights, offering the same hours. While Moix urges keen imbibers to make a reservation in advance, the team will reserve a small area at each bar for walk-ins.