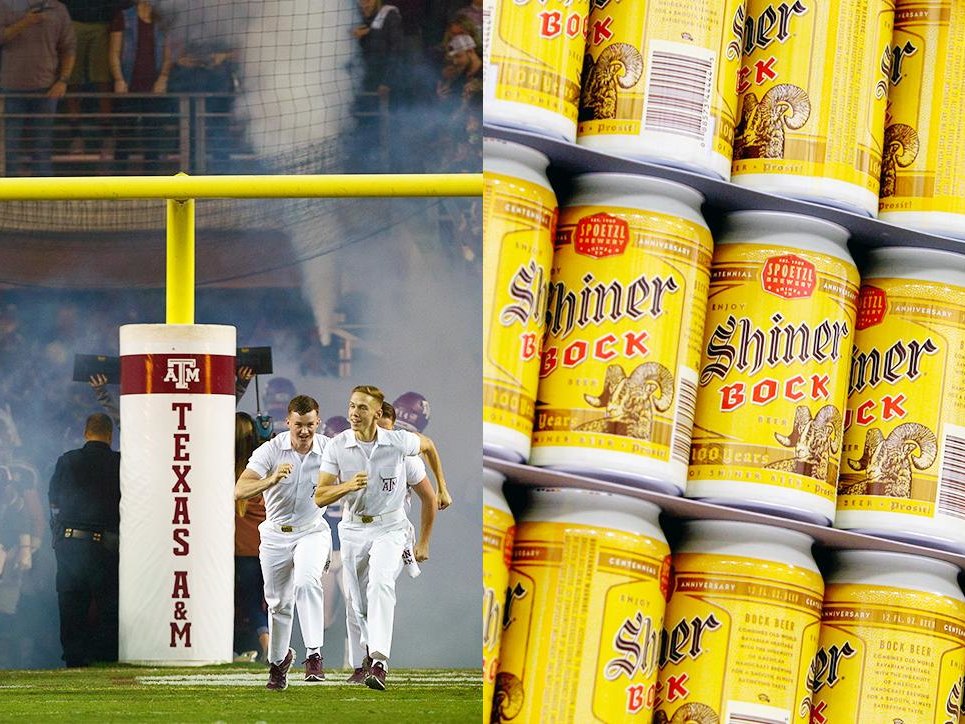 Corona and Texas football probably deserve one another. Both have crafted their #brands carefully to evoke wonderful images.

The reality, however, is a little different.

Texas football: Twenty-one losses in the past three seasons.

Corona: A beer that needs a piece of fruit stuffed in it to taste good.

It’s fitting that the union these two deserved got the press release it deserved. From said release: Before each home football game in Austin this year, fans 21+ can get ready to cheer on the Longhorns with the brand’s activation experience at the Corona Beach House located near the stadium. Fans can enjoy a Corona-branded experience including fun photo opportunities with Corona’s iconic giant Adirondack chair.

Congratulations, buzzword-spouting PR flak. You’ve somehow managed to make beer boring. But it doesn’t have to be. And neither do athletic department partnerships with alcoholic beverage companies. If this is going to become a thing, the schools and booze should be matched appropriately. So let’s tip one back and bring some brands together…

This chocolatey, malty offering from Tuscaloosa’s own Druid City Brewing is as heavy as Da’Ron Payne and hits just as hard.

This Scottish Ale from Tempe’s Four Peaks Brewing company is the ideal way to wash down a burger from The Chuckbox.

This concoction, which mixes a White Russian and Diet Coke, isn’t on the menu at Theo’s in Fayetteville, but they’ll make it for you if you ask.

Pick up some of this wonderful stuff on the road into Clemson from Interstate 85. Get the Apple Pie flavor, designate a driver and then hit the Smokin’ Pig in Pendleton, S.C., for barbecue. Eventually, you’ll make it to Death Valley.

Fort Collins is one of America’s beer capitals, and this New Belgium offering is the brew that put it on the map.

Greenville, N.C., is a wonderful place, but so are the surrounding towns. Nearby Ayden has The Skylight Inn, an all-time great barbecue joint. Meanwhile, Farmville is home to the brewery that produces this beer that drinks like dessert.

Gainesville’s own Swamp Head Brewery makes the perfect by-the-pool beer, and it comes in cans so you don’t get kicked out of the pool.

The Terrapin Brewery in Athens somehow managed to make a Reese’s Peanut Butter Cup in beer form. So we know who should win the next Nobel Prize for chemistry.

I couldn’t leave the great beer city of Grand Rapids, Mich., off this list, so the school in nearby Allendale—which launched the career of Notre Dame coach Brian Kelly—gets to partner with this hoppy, chocolatey brew.

With whom does a brewery partner when it sits in a city that straddles the border between two states? Boulevard’s address is in Missouri, but I feel like we should give my favorite beer to the people who need it most. It’s a Belgian quadrupel aged in bourbon barrels. Later, the brewers add cherries to make up for the angel’s share. The result is a sweet, complex brew that packs 11.2% alcohol. It’s capable of soothing a fan base that hasn’t had much to cheer for on the football field of late.

This local delicacy mixes Old Milwaukee and pineapple juice to devastating effect. This may require a side deal with Little Apple-favorite Varsity Donuts. In Aggieville, the Varsity truck is the most common next stop after a few too many Nancys at the So Long Saloon.

There are so many excellent bourbons from which to choose, but some of the best mass-production bourbon is made one county over from Lexington.

Louisiana has its share of unofficial beverages, but this dark brown ale pairs perfectly with all those delicious things those LSU fans cook at their tailgates.

With enough of this mixed drink from Ann Arbor institution Rick’s American Cafe, you too can forget the Brady Hoke years.

The signature drink of this East Lansing stalwart probably got a lot of people in green through a miserable 2016 season.

I drank this American brown ale for the first time during an epic night at a bar in Minneapolis. But it was born at Big Sky Brewing in Missoula and needs to be the official beer of the Grizzlies.

Chicago’s Goose Island Beer Company has a diverse lineup, but this IPA will help you stand up to the wind off Lake Michigan.

This frozen sangria margarita from Norman institution The Mont has helped many a Sooner make it through the hot, windy summers in Norman.

This Dundee, Ore., winery produces some of the most velvety pinot noir in the country, and it sells for between $16-$25 a bottle in grocery stores in Eugene. It pairs with everything or nothing at all.

Like Penn State’s uniforms, this classic lager isn’t fancy. But it delivers year after year.

The founders of this Wadmalaw Island-based distillery—one of whom is an LSU grad—had to go to Columbia to get the state’s liquor laws changed so they could make this magic liquid. Now, tailgaters at Williams-Brice Stadium can drink a spirit that tastes just like their favorite non-alcoholic beverage.

The lineup at Tampa’s Cigar City Brewery is as stacked as the roster Charlie Strong inherited, but this citrusy IPA is the star.

Volunteers fans sing about getting their corn from a jar, but the truth is it comes from Lynchburg.

If the marketing folks in College Station are smart, their first call after the Texas-Corona news broke was to the Spoetzl Brewery, home of the true state beer of Texas. This union needed to happen yesterday.

Right now, it’s time for a Summer Shandy. But once the season begins, bring on the cold, crisp original. (Preferably with a burger from Dotty Dumpling’s Dowry in Madison.)

This story originally appeared on SI.com.