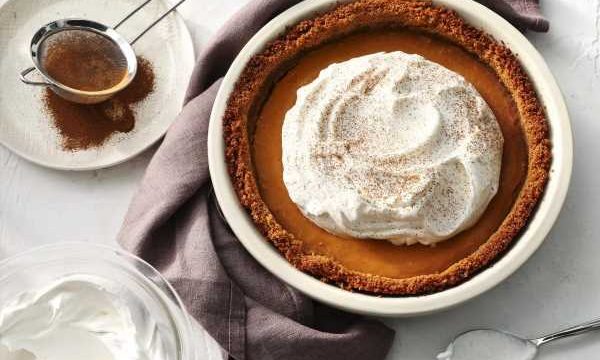 Pumpkin pie is an iconic Thanksgiving dish. You might make apple or cherry pie at other times during the year, but pumpkin is almost always reserved exclusively for the big day, which means it’s important to nail it. Here are five tips to help you make the best-ever pumpkin pie to wow your family and friends.

1. Don’t go rogue and make your own pumpkin filling.

I know it’s tempting to think buying a fancy pumpkin and making your own filling will improve your pie, but it won’t. I’ve never met a single baker, professional or otherwise, who recommends veering away from the canned stuff, which offers superior consistency of flavor and texture. Do yourself a favor and skip the (very time- and labor-intensive) process of making your own from-scratch pumpkin puree.

The spices used in pumpkin pie are fairly universal, so one way to add a little distinction to your version, while also keeping it classic, is to use Vietnamese cinnamon. This variety of cinnamon has a more intense, sweet flavor with a hint of spiciness. I love Burlap and Barrel’s super high-quality, equitably sourced royal cinnamon, which is harvested in the mountains of Vietnam.

With a liquid-filled pie like pumpkin, you can assume that the bottom of the crust will not get any darker or crispier than it is when you add the filling. That means the blind-bake, or the part where you pre-bake the crust without any filling in it, is super important. Use pie weights (or pennies, dry beans, or uncooked rice) to bake the crust for a good 20 minutes, then remove the weights and bake for another 10 or 15 minutes, until the center of the crust is deeply golden. If you’re worried about the edges getting too dark, since they’ll continue cooking once the filling is added, use tin foil to create a little collar, which will protect the edge from burning.

Try It: How to Blind Bake a Pie Crust

Dark brown sugar is made that way with molasses, which is not a typical ingredient in pumpkin pie. It should be, though. It adds a rich, smoky flavor to the pie that isn’t directly noticeable, but adds a delicious complexity that will have everyone asking what your secret ingredient is.

I personally believe that an important part of Thanksgiving is including bourbon in as many dishes as possible, and then drinking plenty of it on the rocks. Nowhere is it more at home, though, than in a pumpkin pie. Use a bourbon with vanilla notes, and simply swap it out for the vanilla the recipe calls for. Trust me, no one will mind.