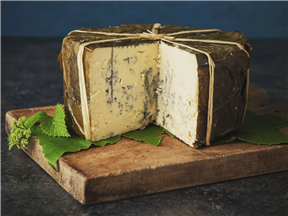 For the first time in the annual event’s history, an American-made cheese won the top spot at the World Cheese Awards.

The Savencia Fromage & Dairy-owned creamery beat out some tough competition: More than 3,800 cheeses from 42 countries and 6 continents were evaluated by a panel of 260 judges in Bergamo, Italy this month.

"This is truly the greatest distinction a cheese can receive. What an extraordinary validation of our commitment to quality, the place that inspires our cheese—Southern Oregon's Rogue Valley—and the excellence of the growing American artisan cheese industry, I am humbled and filled with gratitude," said Rogue Creamery President David Gremmels.

LETS CELEBRATE!!! Rogue River Blue was crowned Best Cheese in the World today at the World Cheese Awards!!!! This is the greatest honor a cheese can receive, and the first time an American-made cheese has been selected. We are, simply put, OVER THE MOON! We only make Organic Rogue River Blue in the autumn when our cow’s milk is at its best. After 9 to 11 months aging in our caves, we hand-wrap each wheel in organic Syrah grape leaves that have soaked in pear liqueur. Each September Rogue Creamery releases Rogue River Blue to you — but it won't last long (especially after today's news), so get some now while it lasts! Shop at roguecreamery.com or at your local cheese counter. Not available locally? Ask your cheesemonger to order a wheel!

Noticeably absent from the Top 5 was France. France’s best-performing cheese, an Epoisses, ranked No. 8. The soft cheese from Burgundy tied with a Swiss Gruyere.

The French press isn’t taking the loss very well: Ouest-France, one of the country’s largest-circulation newspapers, called it “sacrilege.”

“We try to celebrate cheeses from around the world, especially those made by smaller artisan cheesemakers,” John Farrand, managing director of the Guild of Fine Food, which organises the World Cheese Awards, said to The Telegraph. “Good cheese is made around the world, not just by the French. I know lots of French people who work in cheese who know that fine cheeses are made in many different countries.”