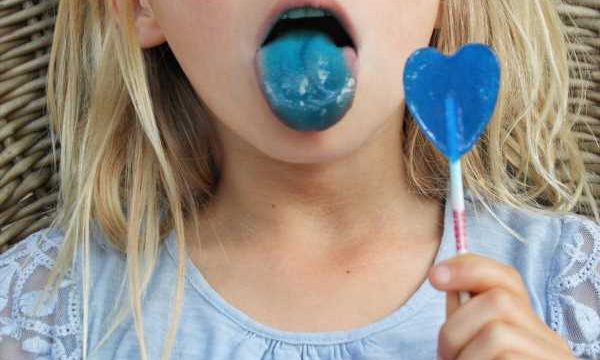 Raspberries are, in fact, red. So what’s the deal with the fruity flavor that temporarily dyes your tongue a shocking shade of blue? Let’s investigate.

No. Blue raspberries do not exist, as delightful as they would be. Real raspberries are a deep, pinkish red.

There is such a thing as a black raspberry, which looks and tastes suspiciously similar to a blackberry.

But, if you’re looking for a Blue’s Clues-esque, chemically enhanced-looking raspberry, you’re not going to find it in nature. If you do, please don’t eat it. It’s a trap.

So Why Are Raspberry-Flavored Things Blue?

Fruit-flavored desserts have been around for thousands of years, but people really started marketing the heck out of them in the 1900s. By the time Cincinnati-based company Gold Medal got around to making raspberry-flavored Italian ice, they likely encountered a problem: They already had too many red options available. Strawberry and cherry were already well-established flavors—they couldn’t possibly add a third crimson flavor into the mix. That would be far too confusing.

They did not, however, have a lot of blue-dyed flavors on their lineup. Though the company can’t confirm this origin story (nobody at the family-run company remembers what was going on in 1958, when the flavor first appeared in ads), we can only assume this is how the flavor was born.

WTF Is In Blue Raspberry Flavor?

Let’s back up. Before we talk about what the flavor is made of, we’ve got to talk about the Food Additives Amendment of 1958.

This amendment banned the use of any known carcinogens in food additives, as well as any additives that had not been adequately tested to establish their safety.

Really, the mid-20th century was a time of renaissance for the world of food colorings and additives. As they were becoming safer and more regulated, vibrant and fruity flavors started popping up in more and more places.

All this culminated for blue raspberry when ICEE debuted its take on the bright flavor in the early ‘70s.

Nothing better than a freshly poured cold thirst quenching ICEE🙌🏽

"Raspberry tasted great as a frozen beverage. However, we wanted something that was a distinctly different color than our flagship flavor, cherry. We came up with blue raspberry," Susan Woods, vice president of marketing of The ICEE Company, said to Bon Appetit in 2016. "The color of blue raspberry flavor was strongly inspired by the blue color that is part of the ICEE brand."

The color she referenced is actually FD&C Blue No. 1, a really intense electric blue that was “permanently listed for food and ingested drug uses” in 1969 by the FDA.

As for the flavor, there’s a reason it doesn’t taste exactly like its namesake fruit: The flavor profile of raspberry was actually developed using "mostly esters of the banana, cherry, and pineapple variety,” according to a quote credited to Jerry Bowman, executive director of the Flavor & Extract Manufacturers Association of the United States, in the same BA article.

No matter what you think of the kid-friendly flavor, the fact remains: More than 132 million 16-ounce blue raspberry ICEEs are sold per year, so clearly, it’s doing something right.