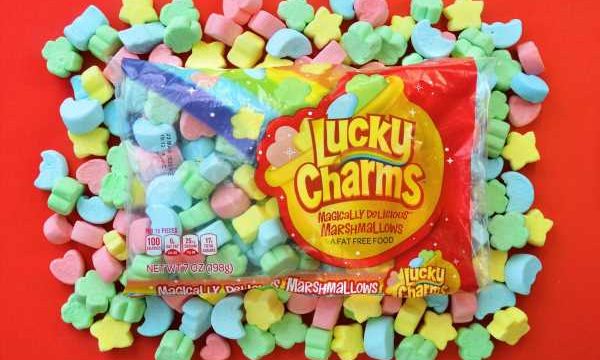 Every kid knows that the marshmallows are the best part of Lucky Charms cereal. And seeing as this is a fact throughout the known universe, over the years, General Mills has occasionally trotted out “marshmallow only” boxes of Lucky Charms as a promotional stunt. But let’s be honest, outside of the context of a bunch of boring toasted oats, Lucky Charms marshmallows, in and among themselves, aren’t that great. Sorry, childhood me, but I think we can all admit these “marshmallows” are a bit on the hard and dry side. But good news: Lucky Charms has finally heeded our call. Working with the brand Jet-Puffed, the cereal is releasing Lucky Charms-inspired real marshmallows.

Lucky Charms Magically Delicious Marshmallows are billed as “a bigger and puffier version of the iconic Lucky Charms shapes consumers know and love including green shamrocks, pink hearts, yellow stars, and blue moons!” The vanilla-flavored sweet also tastes more like “real” marshmallows, too. Jet-Puffed is adding these new Lucky Charms marshmallows as a permanent addition to their product line – so unlike those aforementioned promotional “marshmallow only” boxes, you don’t have to do anything special to get your hands on these 7-ounce bags other than cough up the suggested retail price of $1.50.

Magically Delicious Marshmallows will start hitting shelves this month and should be available nationwide by September. Kraft – the company behind Jet-Puffed – suggests you check out their product locator if you simply can’t wait to track them down.

As for what you should do with these marshmallows once you’ve gotten them, Jet-Puffed suggests that, beyond “adding [them] to your next dessert,” they are also “great for snacking.” (I like where your head is at, Jet-Puffed!) Of course, here’s another idea: You could pour yourself a bowl of Lucky Charms, throw all those tiny subpar marshmallows out, and replace them with these bigger, puffier marshmallows instead. You’re an adult now; you can do whatever the hell you want!