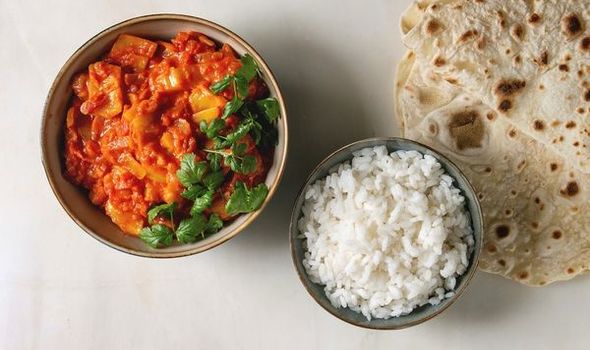 A study of 2,000 adults found one in six Brits tried cooking more global cuisines at home during lockdown, but that getting it right wasn’t always easy.

While 39 percent attempted to cook Indian cuisine at home, it was named the hardest to get to grips with.

English even came fifth in the list of most difficult cuisines to cook, with Spanish, Thai and Greek also featuring.

Anna Beheshti, from Tilda, which commissioned the research, said: “It’s great that the nation has been spending time more time in the kitchen and experimenting with cooking new cuisines and learning new skills.

“However, people still seem to doubt their cooking abilities, despite their willingness to give it a go.

“Novice cooks and passionate foodies alike, claim to lack the confidence or skills needed to cook from scratch, but the success of a dish often has nothing to do with the person cooking it, but the quality of the ingredients used.”

The study also found that despite cooking an average of three different cuisines a week, only 18 percent of adults considered themselves ‘adventurous’ when it came to trying out new meals.

Poor cooking skills (26 percent) and lack of confidence (27 percent) were deemed as the main barriers for UK adults attempting new dishes in the kitchen.

And serving an undercooked meal, food getting stuck to the pan and stodgy rice were unveiled as some of the most common kitchen disasters.

Among the dishes Brits find most difficult to cook are paella, egg fried rice and biryani.

It also emerged more than a quarter of adults has incorrectly cooked rice, with 22 percent admitting it is more difficult to cook than it initially seems.

Top mistakes Brits have made included leaving rice to boil until it sticks to the bottom of the pan (26 percent), incorrectly cooking the rice which meant that it was stodgy (26 percent) and using more grains than were needed (34 percent).

Younger adults aged 18-34 (32 percent) struggled with rice the most, but they are also most adventurous with just over one in three (31 percent) cooking five different cuisines in a week.

Anna added: “Cooking rice from scratch is considered a difficult skill to acquire.

“But incorporating rice in a dish can elevate your meal from good to great and allow Brits to explore cuisines from across the globe, from an aromatic biryani made with long Basmati grains, to a flavoursome red curry soaked up with Jasmine rice.

“With the right knowledge, people of all cooking levels can experiment with cooking a range of cuisines and flavours from across the world from scratch confidently.”

Top 20 most difficult cuisines to master according to Britons: