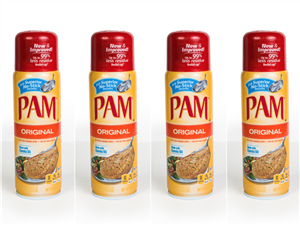 In all of these cases, the cans reportedly exploded as the users were cooking, according to TODAY Food.

"When Pam is used correctly, as instructed, it is a 100-percent safe and effective product,” Dan Hare, Conagra Brands' Senior Director of Communication and External Relations, said in a statement at the time of the original filings. “Pam Cooking Spray is used safely and properly by millions of people several times a day, every single day."

However, 17 new lawsuits filed since May 2019 allege that this is not the case.

A total of 33 lawsuits have been filed against Conagra, which manufactures Pam and other similar cooking spray brands, by law firms Koskoff Koskoff & Bieder and Meyers & Flowers.

The two firms “have conducted unique research and product-safety testing on the design and safety of Conagra-manufactured spray cans,” according to a press release, “which consisted of a variety of experts and lab tests over the course of several years.”

This research, the release states, “proved, undoubtedly” that the cans are defective and present extreme safety hazards for consumers.

Most cooking sprays include propellants that allows the oil to be sprayed consistently and evenly. These propellants can combust when they get too close to a heat source.

The problems detailed in these lawsuits, the release states, can be traced back to a new kind of aerosol can that Conagra began using in 2011. The design, which is used primarily for cans that contain more than 10 ounces of cooking spray, includes an allegedly faulty venting mechanism.

The new lawsuits were filed in the Circuit Court of Cook County in Chicago. Amended lawsuits were also filed in eight other cases on September 20, naming DS Containers, Inc. as a defendant.

Conagra stopped production of these cans earlier this year, but has yet to issue a recall of the products that are already in stores. Millions of cans could remain on shelves for several years, according to the release.

We’ve reached out to Conagra Brands for comment, but haven’t yet received a response.