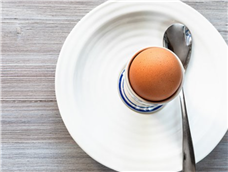 Bad news for people who love the option of buying prepared hardboiled eggs. This week, the CDC issued a food safety alert, stating that “bulk, fresh hard-boiled eggs produced by Almark Foods of Gainesville, Georgia, are contaminated with Listeria and have made people sick.” The government agency said the offending hard-boiled eggs were “packaged in plastic pails for use by nationwide food service operators.” So far, six consumers ranging from less than a year to 82 years old have been afflicted, with one death reported in Texas.

The good news (if there is any) is that it seems the infected eggs from the Georgia-based Almark location were intended to be sold to “retailers and food service operators” rather end consumers who might purchase in a grocery store and eat by itself at home. The CDC notes that those who contracted listeria likely contracted it from hard boiled eggs found in prepackaged deli salads or from salads prepared at restaurants.

Getting Listeria doesn’t exactly sound like a good time. It can cause “headache, stiff neck, confusion, loss of balance, and convulsions in addition to fever and muscle aches.” Pregnant women should be especialy careful, as Listeria can cause infections that lead to miscarriage, premature delivery, stillbirth, and babies born with life-threatening infections.

Watch: Why Are They Called Deviled Eggs?

While the CDC has issued an alert, there hasn’t been any sort of official recall… yet. The organization is warning food retailers and service providers to be mindful of who supplies their bulk hard-boiled eggs, given that consumers have no idea of whether or not they’re walking into a Listeria-laden trap. ​​​​​​​

So you might want to pause any plans to buy prepackaged salad with hard-boiled eggs for the time being. Even more so than normal, it’s really just not worth the trouble.