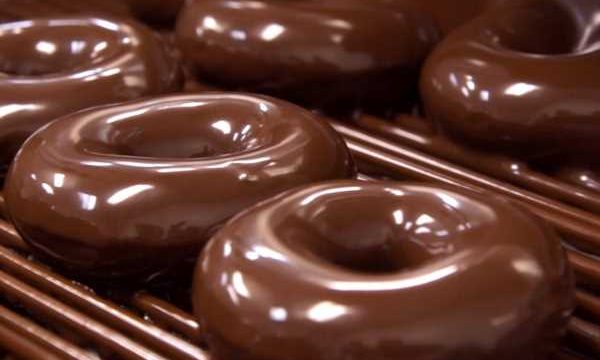 I don’t want to accuse the Krispy Kreme promotional department of slacking, but it’s been a whole six weeks since we last had a doughnut release to talk about. Okay, sure, that summer doughnut collection was a hit with our tasters, but Krispy Kreme is known for keeping the new items coming: The previous Krispy Kreme news was just nine days before that, and yet now we’ve gone a month-and-a-half with nothing but radio silence? What are you doing Krispy Kreme? Enjoying your Memorial Day holiday?? I’m not sure that’s acceptable.

Luckily, Krispy Kreme has something else to tide fans over: Chocolate Glaze Days. This Friday, May 31, Krispy Kreme will once again be re-releasing its popular Chocolate Glazed Doughnut for one day only, at about 250 participating locations across the U.S. and Canada. (You can see an entire list of these shops on the Krispy Kreme website.)

For those not familiar with the Chocolate Glazed doughnut, this “classic Original Glazed Doughnut covered in rich chocolate glaze” (think Entenmann's Rich Frosted doughnuts done Krispy Kreme style) has come and gone over the past couple years: It was first introduced on August 21, 2017, to coincide with a solar eclipse and popped up against on July 7, 2018, to celebrate World Chocolate Day. In January, the chain even rolled out an entire Chocolate Glazed Doughnut collection featuring different spins on the original.

Frankly, a chocolate-glazed doughnut seems so straightforward it’s a wonder that, one, it took Krispy Kreme so long to try it out at all, and two, they haven’t just caved and added it to their regular lineup. But instead, the chain has been using the doughnut to help string fans along over a series of Fridays. In 2019, Chocolate Glazed doughnuts have briefly returned on January 4, February 1, March 1, April 5, May 3, and now May 31. Yes, most people probably would have expected the next release on June 7 — but I guess the moral here is that if you want a release to be special, you have to keep people guessing.