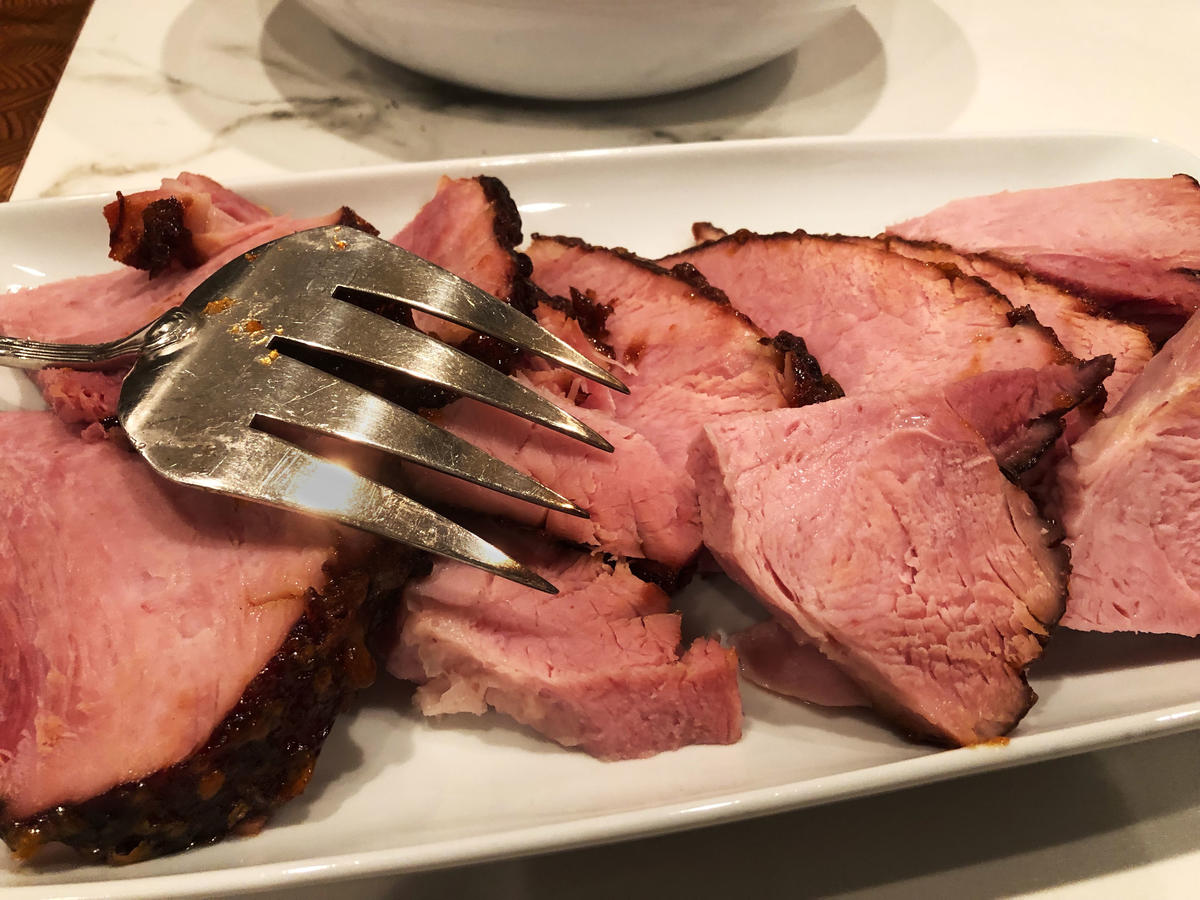 I have always loved ham, pretty much all sorts of ham, from the pale subtle barely-salted flavor of French jambon blanc, to the sweetness of Italian prosciutto. My mom baked canned Krakus hams covered in either apricot jam or orange marmalade, and when the spiral sliced honey-baked hams appeared on the market, my grandmother became an instant fan. If there is a ham on the buffet you will find me mostly within arm’s reach during the event.

I was blessed to be sort of adopted into my dear friend Kevin’s half-Italian, half-Irish family in my 20s, and thus began my tradition of joining them for what we lovingly referred to as the “ham holidays,” celebrating Christmas and Easter together with wild abandon. I had the best of all possible worlds. My own family’s Jewish holiday events, plus Kevin’s family’s Catholic ones. Double the pleasure, double the fun.

(Get the recipe: Chutney-Glazed Ham.)

One year, the farmer with whom we had a poultry and egg CSA gifted us a ham for the holidays.  A bone-in, skin on, 20-pound ham. My household has two people. If someone once said that the definition of eternity is two people and a ham, I can only imagine how that might expand with this gargantuan piece of lovingly hand-raised organic pig. So, I did the only thing I could do. I called Kevin’s mom and asked for a favor. Let me bring the ham to Easter. She acquiesced, thank goodness.

WATCH: Easiest Way To Carve and Serve Ham for A Hungry Crowd

I wanted to make a glaze that was a bit punchier than the usual basic brown sugar or honey mustard, so I experimented with some of my favorite ingredients. Mango Chutney, with its sweet and sour base. Savora, a French condiment that was like a spiced Dijon, for mustard heat with a bit more oomph. Asian honey ginger jam for sweet, and garam masala for musky depth. Raw ginger and garlic and Thai chile to bring freshness to the party, and orange for familiarity and acid

The result was a ham that got demolished at the party, with just enough left for everyone to take a couple of slices home for future sandwiches. And before we left, everyone insisted that I promise to make the Easter ham from then on out, which I did happily. We all laughed about the “Jewish Cousin” being in charge of Easter ham, but it was a task I cherished for years.

Most of the family eventually relocated to warmer climes, and those left behind shifted celebrations to in-laws’ homes, likely grateful to not have to do double duty at the holidays anymore. We returned to our own tradition of movies and Chinese food on Christmas and ignoring Easter altogether. I miss the raucous fun of my bonus holidays with Kevin’s family. The warmth and love, the jokes, the traditions. Aunt Karen’s layered rainbow Jell-o mold and Marnee’s famous potatoes, Uncle Mark’s ball-busting, and the famous family secret recipe cheese ball.

Not gonna lie, I really miss the ham.

This recipe makes enough glaze to generously baste your ham while cooking, and still have some left to make a sauce serve on the side. And feel free to invite me. My ham calendar is wide open.

Get the recipe: Chutney-Glazed Ham.