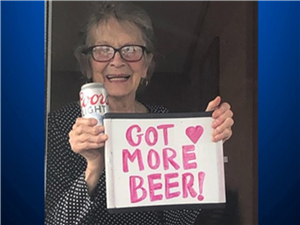 In case you weren’t aware, we’re living in dark, anxious times. Millions are worried about lost jobs and navigating overcrowded unemployment systems. Pretty much everyone else is at least moderately afraid of going outside. For one 93-year-old woman in Pennsylvania, the most terrifying aspect of the pandemic was the prospect of running out of beer.

According to reports from a local CBS News affiliate, Olive Veronesi enjoys drinking a nightly Coors Light, in part because “beer has vitamins in it.” But the elderly Seminole, PA resident’s respect for social distancing guidelines eventually meant that she was down to her last 12 cans. That led Olive to issue a desperate plea to neighbors and her daughter. It quickly went viral, because evidence suggests a lot of people can sympathize with Olive’s plight.

TOO FUNNY: ♥️🍺 93-year old Olive Veronesi from Seminole, PA is doing her part to stay home and stay safe, and she’s sending this message to her neighbors and to her daughter.

Given that a sweet 93-year-old woman asking for more beer could spur any decent human being into action, Olive’s community came through for her in her time of need. Thanks to some help from the folks at Molson Coors, Olive was able to amass ten cases of beer, filled with 150 cans total. Given her one beer a night habit, that should help her make it through nearly five months of quarantine time (though hopefully measures will have relaxed a little bit by then).

To celebrate the generosity, Olive immediately cracked open a cold one on her porch, issuing a statement that isn’t often applied to a Coors Light: “that tastes pretty good.”

And of course, she updated the famous sign to let anyone concerned know that she was doing alright.

🍺GOT MORE BEER!🍺 A Pittsburgh area woman who went viral for holding up a "Need More Beer" sign while holding a Coors Light has gotten her wish. Molson Coors just delivered the 93 year old… 10 CASES OF BEER! More on KDKA.com!

So let that be a lesson to you: even in the darkest times, we can all be there for our elderly neighbors who need beer. Staying connected and cracking open the occasional Coors Light can every now and then is how we’ll get through this thing together.