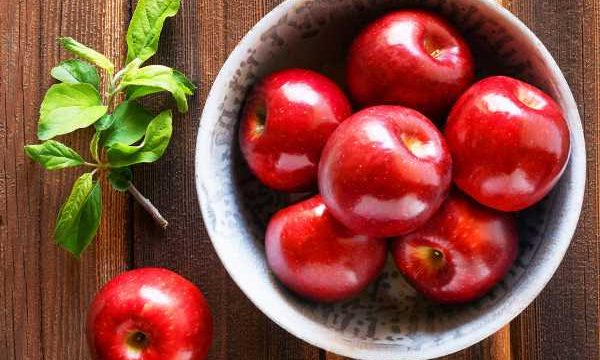 The best part of fall doesn't involve pumpkin spice, it doesn't involve cable-knit cardigans, decorative gourds, or the kind of weather that makes you feel like you've stepped into a Bon Iver song. No, the absolute peak of the season is when Honeycrisp apples start appearing in the produce section of the supermarket and stacked on rough-hewn wooden tables at the farmer's market. (Okay, to me it is, at least.)

But a new variety of apple will be available later this year, and not only is it expected to have the same sweetness, tartness, and satisfying crunch of a Honeycrisp, but it might also might fill shelf space that would've been wasted on those eternally underwhelming—and flat-out misnamed—Red Delicious apples, too.

The Cosmic Crisp is a cross between Honeycrisp and Enterprise apples, and it has already been described as a "game-changer" and "a once in a generation event." The apple, which got its name because its skin looks like "cosmic stars over a sea of red"—horticulturists are flat-out thirsty for this one—hasn't even hit the shelves, and it already has a twenty-plus year backstory.

This all started in 1994 when Washington State University horticulturist Bruce Barritt lobbied hard for funding from both the University and the state's apple industry to launch an apple breeding program. "We didn't start the breeding program until we had the [Washington Tree Fruit Research Commission] on board," he told Northwest Profiles. "The Cosmic Crisp was from a hybridization that was made in 1997. The techniques used are fairly standard. You take pollen from one variety and you put it on the stigma of another variety and you get the seed. The seeds produced in that cross were planted in the orchard and evaluated and, in the end, we ended up with Cosmic Crisp."

The Cosmic Crisp is the first apple to be bred in Washington, which is pretty incredible, considering that growers in the state produce 70 percent of the apples sold in the United States. Fortunately for those same farmers, they'll have the exclusive rights to produce the Cosmic Crisp for the next 10 years, while Washington State University will retain the patent to sell it internationally. (The Associated Press reports that prospective growers do have to purchase a license to buy the trees, and those fees are being used to help pay for the decades of research that it took to develop the apple.)

Kate Evans, a Washington State University horticulturist who took charge of the Cosmic Crisp project when Barritt retired, it could replace the flagging Red Delicious for growers too. "The other thing that has worked particularly in this apple's favor is that, from a grower's perspective, it's harvesting at about the same time as Red Delicious," she said. "And there have been many growers in Washington that have been looking for quite some time for a variety that they can use to replace Red Delicious […] when they're planning their harvest. If you're going to pull out a variety, you need to find something else that's going to fit that harvest window."

According to Seattle Business, both consumers and farmers have grumbled about the quality of Red Delicious apples, which now accounts for only 34 percent of the apples grown in the state—a significant drop for the variety that used make up 75 percent of Washington's apple yield.

Another reason why the Cosmic Crisp is supposedly superior to other varieties like Red Delicious, Fuji, and Gala is because of its acidity. Those three have a low acid content, even before they're kept in storage or, say, shipped across the country. By contrast, the high natural sugar content and the higher acidity of the Cosmic Crisp mean that it should taste just as good when it's picked as it does after it's taken a thousand-mile trip to a retailer, or after it's spent several days on your kitchen counter. (That high acid content also means that they won't brown as quickly after they're sliced either—an added bonus for anyone image-conscious about their fruit.)

But most importantly, on top of all that, the Cosmic Crisp just aims to be a good eatin' apple. "It was developed to make the consumers happy," Barritt said. "That's it. That's the whole story."

Cosmic Crisp apples are expected to start shipping from Washington state to supermarkets and other retailers on December 1. So beat it, pumpkin spice, and take those Red Delicious apples with you.