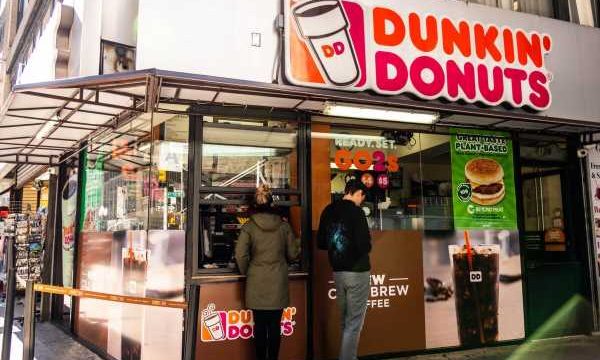 If there was such a thing as a special time on the doughnut calendar, it’s in June. That’s almost entirely because National Doughnut Day falls on the first Friday of June every year (which was the end of National Doughnut Week for the overachievers at Krispy Kreme), but it turns out that Dunkin’ still has something special planned just in time for the tail end of Gemini season.

Perfect for anyone with a June birthday, Dunkin’s released the “Celebration Donut,” which certainly seems to live up to its name. This birthday cake-style doughnut features white icing adorned with purple, orange, and yellow sprinkles on the outside. That sounds pretty good by itself, but the real magic happens once you bite into it. The inside features what’s described as “confetti pieces,” which I’d interpret as some sort of tasty funfetti treat and a definite twist on how a doughnut is normally filled.

Not only does Dunkin’ have you covered in terms of a birthday breakfast, they’re re-adding at least one tropical flavor back to their drink menu just in time for your summer staycation. That’s right folks: the Pineapple Coolatta is back on Dunkin’ menus in both the northeast and the southeast, marking its return after a nationwide rollout in 2018.

Just like beautiful summer weather, these two treats won’t be around forever. The Celebration Donut is only around for a limited time while supplies last, and the Pineapple Coolatta will only be here for June. If you’re desperate, Dunkin is doing a massive hiring push right now, and I’d imagine they offer some sort of employee discount. I suppose there are worse reasons for taking a job.