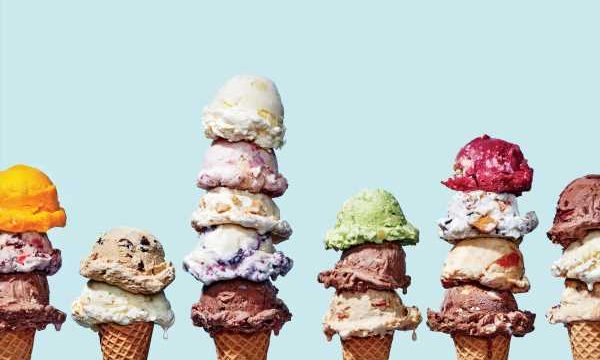 Just in time for National Ice Cream Day, the team over at Square, a financial services provider for retailers across the nation, has released new findings about which ice cream flavors Americans are screaming for these days. And their data shows that ice cream parlors may have menus that read more like cafés or bars than anything else; some of the flavors that saw the most year-over-year growth are traditionally found in coffees and cocktails rather than piled high on a cone. According to Good Morning America, Square's report shows that the five flavors that surged in popularity between 2018 and 2019 include horchata, whiskey, "unicorn," salted caramel, and sesame.

Based on the popularity of unicorn-themed frozen coffee drinks served at national chains like Starbucks over the last few years, we could see why Americans are ordering scoops of unicorn ice cream, which usually is blended into Instagram-worthy hues with food coloring and vanilla extract. And since horchata, a beverage infused with rice milk and cinnamon, is popular in coffee shops and cafés throughout the year, it makes sense that it would make a crossover into the dessert category, too. According to Square's data, horchata-flavored items have seen more than 250 percent growth in sales in the last year alone. ​

RELATED: A Guide to the Sweet Differences Between Ice Cream, Gelato, Sorbet, and Sherbet

Whiskey, however, is a bit of a rogue trend; data analysts say that the flavor grew in popularity by 56 percent year over year, alongside sesame at 86 percent and salted caramel, a perennial favorite, at 77 percent. Some of these flavors are also available in new vegan ice creams sold in supermarkets across the nation, which saw around 220 percent sales growth between 2015 and 2018, according to the same report—these equally delicious varieties are made with dairy alternatives like almond milk, soy milk, and coconut milk. It seems that ice cream's popularity isn't just influenced by us, either, as sales of "ice cream" for dogs has also grown exponentially in the last year: dog owners made 55 percent more purchases of these faux treats for their furry friends.

This report comes on the heels of previous research that illustrated cookies and cream as the most popular choice for ice cream lovers in 14 different states across the nation. While Square's report didn't break down flavors' growth per state, it did find that those living in Vermont enjoy the most ice cream during the sultry month of July. Beyond Vermont, home to Ben & Jerry's, Oregon, Hawaii, Montana, and Washington, D.C. round out the list of states where Americans are eating the most ice cream of all.