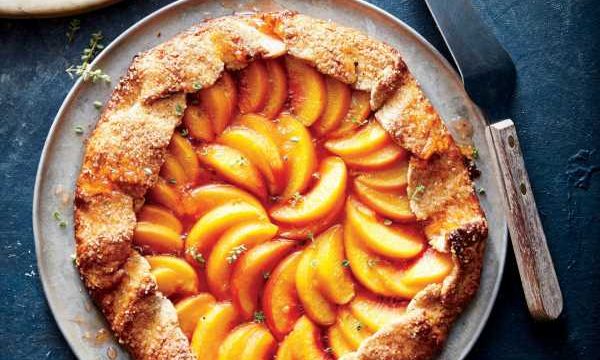 On vacation this summer, I was cooking a big dinner for around a dozen people and feeling pretty accomplished. I had already made a large bowl of cole slaw, baked a squash casserole, boiled a sizable portion of corn, and rubbed and marinated a variety of steaks and ribs for grilling. Earlier in the day, I had also prepared a simple watermelon sorbet from scratch. Still, something was missing: a heartier dessert. So, with little time to spare, I decided to throw together a peach pie.

It seemed innocent enough at the time, but I made one big mistake. After I’d rolled out the dough, I went looking for a pie dish—yet all I could find was a round baking pan with no sloped sides. I tried to keep calm, thinking that maybe I could defy physics, and gently coaxed the bottom layer of the dough into the pan. The sides immediately flopped over, like sad dog’s ears. Worse, because I was stretching the dough more than I normally do, it was starting to rip apart. My heart began to race.

Great cooking comes down to confidence

WATCH: What's a Pie Bird And Do I Need One?

If you make pies, I’m sure you’ve been in some situation like this. Everything is going smoothly until the dough gives you trouble—it won’t come together, say, or it is starting to look like Swiss cheese because you’ve overworked it. But I am here to tell you that this needn’t be a problem. You can always pivot and make a galette as a fallback if your pie dough is being unruly.

Galettes are easier to make than pies because they only require one rolled-out dough round rather than two. They are kind of like rustic tarts, with the sides folded over to keep the filling in. Galettes almost always look tossed off because they don’t require much manicuring, unlike a pie, whose edges often need to be crimped and fluted and which sometimes requires a lattice top or some other sort of complex decoration. Crucially, galettes don’t require a pie dish—just a baking sheet and some parchment paper.

RELATED: Galettes are the Lazy Pies You're Looking For

I had never before made a galette when my plans for a peach pie dessert were crumbling apart. But I’d watched enough cooking shows to know that it wouldn’t be that hard. I tossed the round cake pan to the side and began rolling the dough—I was using a wine bottle, as I had also failed to ensure that the kitchen had a rolling pin—into one large round.

The dough was still a little stubborn, but because galettes don’t have tops, there was less pressure to make it look appealing. Whatever holes there were I patched over with more dough. Then I transferred the dough to a baking sheet, poured the peach filling into the middle of the round, folded the sides over and placed it in the oven.

RELATED: How to Make a Galette Without a Recipe

About 45 minutes later, I pulled out a nice galette that my guests seemed to enjoy heartily. The only problem was that, in my haste, I forgot to do an egg wash, which is where you brush the dough with a beaten egg so the crust browns nicely while it bakes.

Still, the galette came through. Not bad for a failed pie; not bad at all.