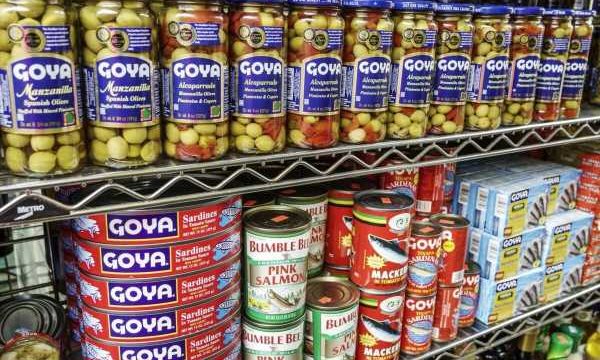 On Wednesday, President Donald Trump welcomed Mexican President Andres Manuel López Obrador to the White House, a meeting that has been described as either a good-faith attempt to strengthen the relationship between the North American neighbors, or an excuse for a photo op, depending on which political party is talking about it.

A day later, Trump made an appearance in the White House Rose Garden, where he announced the launch of the White House Hispanic Prosperity Initiative, which he says will "improve Hispanic Americans’ access to educational and economic opportunities." One of the speakers at the 30-minute outdoor event was Robert Unanue, the CEO and president of Goya Foods.

In his brief remarks, Unanue was unwavering in his praise and support for the president. "[W]e’re all truly blessed at the same time to have a leader like President Trump who is a builder," he said. "And so we have an incredible builder, and we pray—we pray for our leadership, our President, and we pray for our country that we will continue to prosper and to grow."

Unanue also announced that his company will be donating one million cans of Goya-brand chickpeas and one million pounds of food to to food banks throughout the United States "at this special time"—which presumably meant "while we're in the middle of a pandemic."

Although the donation is certainly a welcome gesture, Unanue's comments that the country was "truly blessed" to have Trump as president struck a nerve with some members of the Latinx community, many who haven't forgotten some of the derogatory and dehumanizing remarks that the President has made about Hispanic immigrants, especially those from Mexico.

"It's shameful and appalling that the president of Goya Foods is praising the most anti-Latino president in the history of our country," Nathalie Reyes, the CEO of the Latino Victory Fund, told NBC News. "President Trump has disrespected and attacked the Latino community since Day 1. We call for a boycott of Goya Foods products and anyone who stands with Donald Trump and against our community."

Within hours of Unanue's appearance, #BoycottGoy, #Goyaway, and #Goya were all trending on Twitter."Oh look, it’s the sound of me Googling 'how to make your own Adobo,'" Rep. Alexandria Ocasio-Cortez (D-NY) posted.

"[Goya] has been a staple of so many Latino households for generations," former Secretary of Housing and Urban Development Julián Castro wrote. "Now their CEO, Bob Unanue, is praising a president who villainizes and maliciously attacks Latinos for political gain. Americans should think twice before buying their products.

Meanwhile, Republican strategist and CNN analyst Ana Navarro encouraged anyone who plans to join the Goya boycott to donate any of their now-unwanted products instead of throwing them in the trash. (She also recommended Badia-brand spices as a less controversial alternative.)

During a Friday morning appearance on Fox & Friends, Unanue didn't back down from the controversy, calling the proposed boycott "suppression of speech."

"So, you’re allowed to talk good or to praise one president, but you’re not allowed to aid in economic and educational prosperity?" he said. "And you make a positive comment and all of a sudden, it is not acceptable."

Although Unanue was not as effusive in his praise of former President Barack Obama, he and Goya did partner with Michelle Obama to launch a Spanish version of her MyPlate healthy eating initiative. Unanue also met with President Obama in the fall of 2011, at a reception to celebrate Hispanic Heritage Month. (He said he was "honored and humbled" to have been invited to the White House.)

On Friday, Goya also released an official statement about its planned food-bank donations, describing itself as "an iconic institution in the Hispanic community" and the largest Hispanic-owned food company in the U.S. "Through the company's Goya Gives program and since the company's humble beginnings, Goya has a long history and tradition of supporting communities in times of disaster," it wrote.

The company has not officially addressed the backlash, although Unanue essentially responding "I said what I said" seems like it could be the final word—at least from their side.