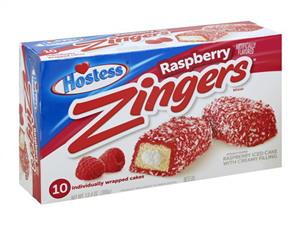 If I told you I knew what a Hostess Raspberry Zinger was before five minutes ago, I’d be lying. While part of their broad snack lineup, they don’t seem to attract quite the passionate support as more famous fare like Twinkies and Cupcakes.

While the Raspberry Zinger’s lack of place in our collective snacking consciousness would normally be a bad thing for the brand, it would at least mean that fewer consumers will have to worry about a recently announced recall.

According to an FDA announcement, Hostess has voluntarily recalled some of its Raspberry Zingers out of fear that they could potentially grow mold before their best-by date. The recall covers both fresh multi-packs and single-serve versions of the raspberry-iced cakes with a creamy filling. That applies to both fresh and frozen-served editions as well.

The offending Zingers were shipped to a variety of retailers nationwide, and the FDA announcement helpfully mentions both the batch and item UPC in case you’re worried you might have picked up any of these potentially moldy pastries. If you’re worried about spotting them in stores, consumers are advised to steer clear of Raspberry Zingers with a best-by date ranging from August 26 to August 29.

The Hostess recall news comes shortly after one other (higher-profile) instance of moldy berries. Trendy LA eatery Sqirl was recently accused of skimming the mold off of their jam and serving it, which is, to put it mildly (or should I say moldly?), not a great idea.

Anyways, if you did purchase any of the offending Raspberry Zingers (not to be confused with the Celestial Seasonings tea flavor), contact your place of purchase to try and get a full refund. In the meantime, maybe try some different snacks while you’re at it.