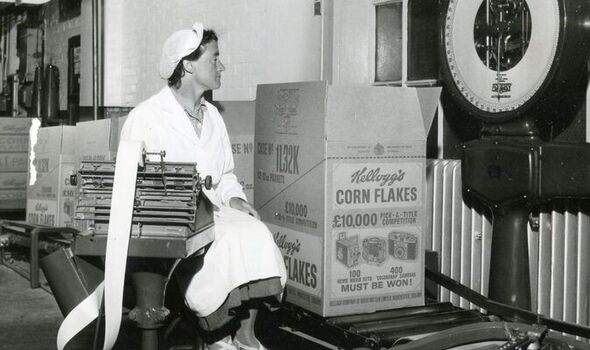 One snapshot shows a happy looking worker filling boxes by hand in 1963 – a long way from the million boxes produced every day by the manufacturer in Manchester today.

If stacked end-to-end, the estimated six billion boxes produced in the UK since 1922 would stretch to the moon and back TWICE over.

Each 500g box boasts around 5,000 Corn Flakes, making the approximate number of Corn Flakes made in the UK in the last one hundred years an incredible 30 trillion.

Another image features packaging from some of the earliest Rice Krispies boxes from 1938, with a nursery rhyme on the back of the pack.

Kellogg’s Corn Flakes and All Bran were first introduced to the British Public in 1922, where they were imported originally from the USA and later from Canada.

The cereal brand opened its first British factory in Trafford Park, Manchester on May 24, 1938.

In 1936, a box of Corn Flakes was priced at 5 and a half old pennies, with UK sales at the time exceeding 50 million packets sold.

A spokesperson for Kellogg’s said: “One of the first cereals we launched in the UK was Corn Flakes, it’s now been a part of British breakfast tables for generations, and we hope to continue feeding the nation for a good while yet.

“It’s fascinating to look back at the history of our factories and see how things have changed.” 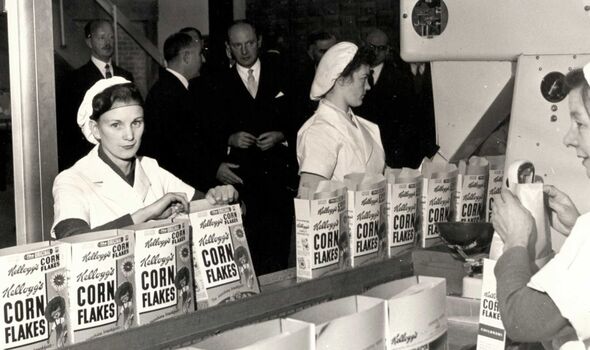 The company’s Manchester factory is the largest cereal factory in Europe and manufactures corn and rice-based products including Corn Flakes, Rice Krispies, launched in 1928, Frosties – 1954, Coco Pops -1960 and Crunchy Nut in 1980, among others.

It runs 24 hours a day, seven days a week, for 350 days of the year and employs around 400 people from the local area.

More than 70 million kilograms of honey have been used in the last 42 years in the production of Crunchy Nut, while 1.2 billion peanuts are used every year and each 500g box contains a whopping 6,000 golden Crunchy Nut flakes.

To celebrate its 100th anniversary, the cereal giant has produced a number of limited-edition boxes, 100 of which keen-eyed collectors will be able to get their hands on soon.

Kellogg’s’ spokesperson added: “We’ve had a rich history and produced an awful lot of cereal in that time.

“Who knows what the next hundred years will bring, we’re just really proud that even after a century on UK shores, there’s still an appetite for Corn Flakes.” 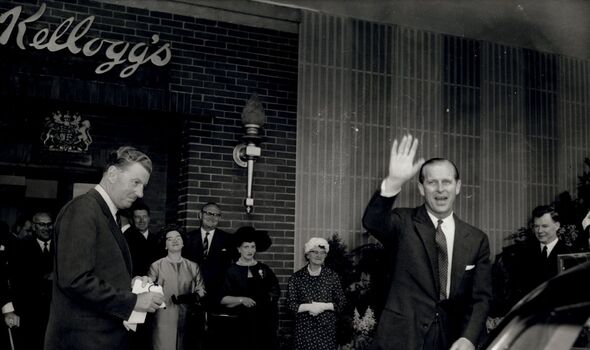