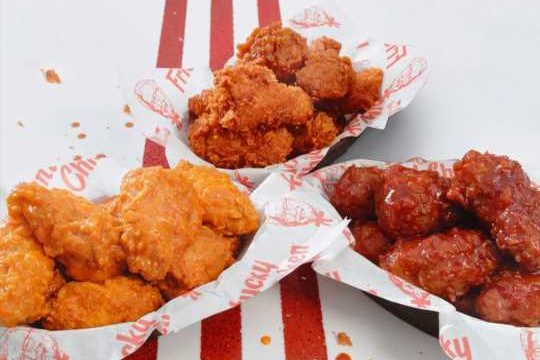 When you think of game-day snacks, some of the first things that come to mind are probably sauced-up Buffalo-style fried chicken wings. And yet when you think of fried chicken (at chains, at least) your mind probably jumps to KFC. Until now, KFC hadn’t delved too deep into the drummette and wingette territory normally reserved for sports bars and pizza joints. But this week, the chain is jumping into the wing market with the release of Kentucky Fried Wings.

The permanent menu item comes in four varieties: classic (no sauce), Honey BBQ, Buffalo, or Nashville Hot (in order from least to most spicy). Unlike traditional Buffalo wings, all four flavors are breaded and fried similar to traditional KFC chicken, with a bit of a spiciness in the coating, meaning that even the classic wings have a bit of a kick. The batter recipe is somewhere between Original Recipe and Extra Crispy in coverage and texture, a KFC spokesperson confirmed.

We received a spread of all four flavors and were surprised and impressed by the crispiness and the fully-present spice factor, even in the unsauced version. The sweetness of the Honey BBQ wings balanced nicely with the heat. The Buffalo wings had that traditional Buffalo tang, while Nashville Hot was a little smokier. All four options come with ranch dressing on the side.

KFC has already been serving Nashville Hot and Honey BBQ menu items, and the sauces here are essentially the same, with the vinegary Buffalo-style sauce joining the menu. And the chain had previously served Hot Wings in buckets and meals, thus, as a spokesperson told me, these new KFC Chicken Wings are considered a relaunch.

The wings are available in quantities of six for $5, 12 for $9.99, 24 for $18.99, and 48 for $36.99 (that last option is available via delivery only). And speaking of delivery, that service is newly available via order.kfc.com, as well as via Grubhub and Seamless. From now until November 24, KFC fans can score free delivery on any order over $12, no special code required.