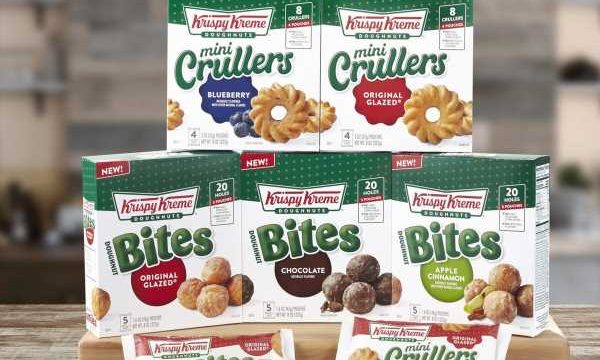 This article originally appeared on Allrecipes.

There's nothing like that first bite into a Krispy Kreme doughnut. Warm, tender, sweet — it's worth a detour any chance you get. But Krispy Kreme doughnuts are not sold nationwide, which makes the sweet satisfaction of a sticky-sweet doughnut impossible to obtain for some. But not anymore.

For the first time ever, Krispy Kreme is packaging its doughnuts into "bite-size" form and selling them nationwide, for all our tiny snacking pleasures. The bakery brand will start by rolling out a new assortment of packaged Doughnut Bites and Mini Crullers. They will be available for purchase at all Walmart locations across the U.S. and on their site, the Walmart online grocery store, by July 2020.

Krispy Kreme says you should expect five all-new products: Original Glazed, Chocolate and Apple Cinnamon Doughnut Bites will be sold in five sleeves of four Doughnut Bites per box, or 20 doughnuts total for $3.97. The new Mini Crullers will come in two standard flavors, Original Glazed and Blueberry, and be sold in four sleeves of two Mini Crullers (eight crullers total) for $3.97 or a 12-ounce box for $3.88.

What's more, two new limited-edition seasonal flavors are kicking off the new product launch. First up, Strawberry Doughnut Bites and Lemon Crullers will be available for a limited time this summer. New flavors will be announced periodically.

To celebrate the nationwide rollout, Krispy Kreme and Walmart will host its first ever "Virtual Grand Opening" on Wednesday, June 24, and they will offer people across the country to participate in a couple of fun summertime games — all for a chance to win free doughnuts for a year. You can also expect a special appearance by Krispy Kreme franchisee Shaquille O'Neal, too. Learn more at Krispy Kreme, and enter to compete and get those taste buds ready for some amazing new treats!