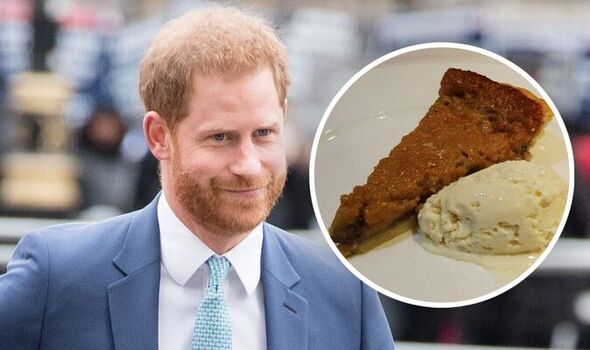 Prince Harry, 38, grew up in Kensington Palace as the younger son of the late Princess Diana. The former Princess of Wales had her own personal royal chef, Darren McGrady, who now runs a Youtube channel with 263,000 subscribers.

Mr McGrady often reveals trivia about working for the Royal Family and personal anecdotes about individual members, including the young Prince Harry.

The Duke of Sussex reportedly loved treacle tart, the royal recipe of which only has four ingredients – pastry, golden syrup, breadcrumbs and lemon juice.

“In the Royal nursery when Prince Harry and Prince William were young and into their teen years. It’s a delicious traditional British comfort food and served hot or cold with whipped cream, ice cream or lashings of custard.

“No wonder it has been on the Brits (and royal) menus for years. Even the Queen enjoyed treacle tart and it was often on her menu (and requested by her) at Buckingham Palace.

“It’s the perfect alternative to the American pecan pie, a delicious and interesting change on the Thanksgiving table.”

Cream the butter and sugar until light in colour. Add the egg, water and vanilla paste then slowly incorporate the flour to form a ball.

Wrap the paste in parchment paper and refrigerate for at least an hour before use. This recipe will make more pastry than you need for this one tart.

But Mr McGrady always likes to have some in the fridge spare and it keeps for at least three weeks.

Preheat the oven to 350 degrees Fahrenheit. Roll out the pastry to about half an inch thick and line an eight-inch flan ring or pie dish.

Blind bake to allow the crust to set a little. In a large bowl combine the golden syrup, breadcrumbs and lemon juice and spoon into the lined pastry case.

Bake in the centre of the oven for about 30 minutes or until the pastry edges are golden brown. Remove from the oven and allow to cool slightly.

Slice and serve with Ice cream, whipped cream or English custard. Royal fans loved the recipe and shared their opinions on Mr McGrady’s version of a treacle tart.

YouTube account Nancy Hanson said: “Darren, I love your channel! That tart looks super yummy! I am definitely going to be making this tart very soon.”

Another account, @RockStop22 added: “Always love your videos, Darren! They are so charming and entertaining, and you make these delicious recipes look so easy! I also love how you always speak so fondly of your time with Princess Diana and the boys.”