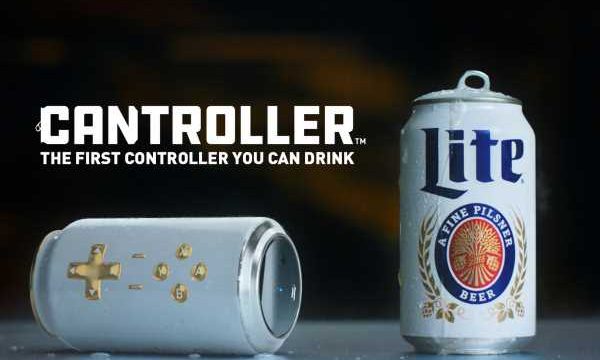 The general sentiment seems to be that young people don’t go out as much as previous generations — much to the chagrin of things like the beer and restaurant industries. The jokey reason is that millennials like to “Netflix and chill,” but another factor that seems to get overlooked is gaming: Beers are a lot cheaper when you’re socializing at home over a headset. Finally, it seems like Miller Lite might get it: The brand has created the Cantroller — an actual video game controller and an actual 12-ounce can of beer all wrapped into one.

The Cantroller is billed as “a standard 10-button controller, with Bluetooth, USB charging and 12 fluid ounces of the original light beer” that “connects wirelessly to multiple consoles and PC.” To put it another way, users get a directional control pad and A, B, X, Y, start, and select buttons (think a Super Nintendo controller but without the L and R buttons) wrapped around a standard beer can — that actually holds beer until you drink it — along with haptic feedback and a lithium ion battery that offer three hours of gaming time and can be recharged with a micro USB cord. You can even refrigerate the Cantroller to make sure your beer is nice and cool if you ever choose to actually crack it open.

Speaking of which, the controller aspect of the can can be used repeatedly; however, the beer can only be drunk once. Though, in theory, it would be fun if every can in an 18-pack was a controller, that would be expensive and wasteful. So instead, Miller Lite has only made about 200 of these special beer-controller hybrids and will be giving them away exclusively during E3 this week. On June 12th, players will have the chance to use the Cantroller to beat comedian Eric Andre in Street Fighter. If they win, they get to keep it. The event will be held in Los Angeles at 1147 South Hope Street: Signups are happening at thecantroller.com. (For the record, I pointed out that Street Fighter is a six-button game, and they said that, yes, participants would have to improvise a bit with the Cantroller.)

If you won’t be in Los Angeles, Miller Lite will also be live streaming the event on their Twitch channel, at www.twitch.tv/MillerLite. And don’t give up all hope: The brand says “there may be more to come.”