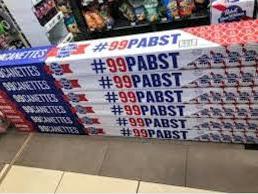 You’ve likely been familiar with the mythical concept of 99 bottles of beer on the wall since childhood. But by the time you were old enough for your first legal beer run, the logistical difficulties of such an effort were probably apparent. Buying 99 bottles (or cans) of beer would involve at least three 30 racks and two six packs. What a nightmare!

Pabst Blue Ribbon feels your pain, and they want to do something about it. Recently, the brand of cheap beer commonly associated with hipsters and dive bars is now offering you the chance to buy a 99 can “family pack” of beer in a single, (not so) convenient package. I don’t know what kind of family you have, but you’ve gotta think that’ll at least last through the night.

The @pabstcanada #99pabst is here! Tag your friends you want to share this limited edition pack with this long weekend! #yourweekendstartshere

Based on the available evidence, you’re getting exactly the number of cans mentioned. At least some of the cases feature a mixture of original PBR (the red white and blue can you’re familiar with), alongside less-common PBR easy and PBR extra, the brand’s lighter and heavier beers, respectively. Though the artwork on the box makes it kind of look like you’d find tall boys inside, the labelling indicates that these are your standard-sized cans.

A story from a Minnesota liquor store, where the Family Pack sold out in less than 24 hours indicates the case measures an astounding seven FEET from end to end. That means you’re probably going to need some help carrying this limited-edition thing to your car. And once you get it there, you better bungee cord it to the roof or else put every row of seats down in your SUV to bring it home.

The deal is somewhat too good to be true, as PBR says it will only be for sale in 15 states across the country. Prices vary, costing up to $175 in some places. So it’s a lot of work to move around, and a lot of money to buy. But once you get it home, your family will be ready for one hell of a party.