Queen Elizabeth II and the rest of the UK Royal Family no doubt can have their pick when it comes to chefs and cuisine. However, there are a few popular foods that the Queen reportedly does not like.

Former royal chef Darren McGrady reportedly said: “The Queen does not care much for pasta and bread.”

Rather, she “likes to eat meals containing fish or meat and vegetables instead”.

She is not a fan of the ingredident garlic. 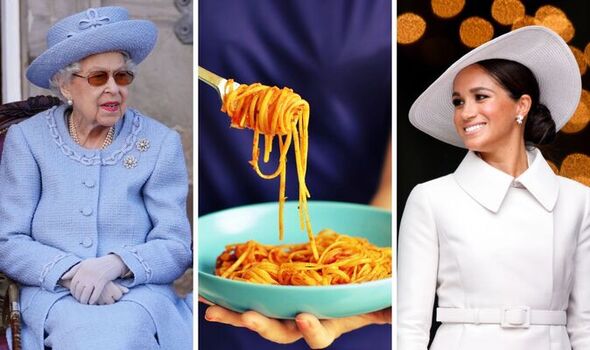 With the Royal Family dining in extravagant – and often expensive – outfits, it is unsurprising that tomato sauce may be a no-go in case of spillage.

However, there is one royal who absolutely loves a pasta dish.

The Duchess of Sussex shared with Delish her recipe for “sexy, filthy” meatless pasta sauce.

There is plenty of zucchini, lemon and onion but no sign of tomato, so HRH may not totally disapprove.

However, according to Delish, the Queen only eats pasta on special occasions.

Her Majesty follows a healthy diet consisting of plenty of vegetables, which is probably one of the reasons she is so fit and healthy at 96.

In conversation with The Times, Darren McGrady took royal fans through what the Queen typically eats in a day. 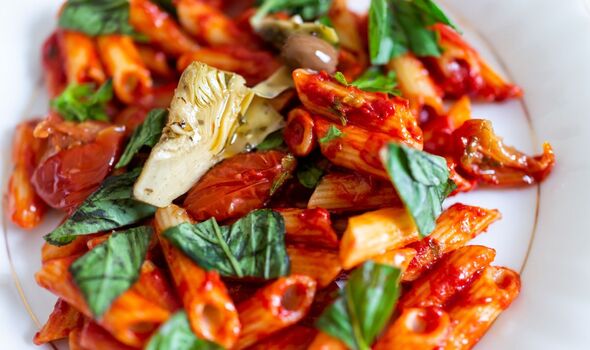 She reportedly starts off the day at 9am with Cornflakes or Special K, with a spoonful or two of apricots, prunes or macadamia nuts.

Alternatively, she may feast on a boiled egg or toast and marmalade with Darjeeling tea.

At 1pm, the royal’s lunch would likely be extremely healthy, for example a grilled Dover sole on a bed of wilted spinach or courgettes.

But the Queen it not adverse to an afternoon treat, where she might enjoy scones or cakes.

According to McGrady, her favourite cakes were honey and cream sponge, ginger and fruit.

Another favourite was the chocolate biscuit cake that Prince William later decided to serve at his wedding.

She would also enjoy raspberry jam sandwiches cut into circles the size of an old English penny.

As for dinner, this may be game or fish, perhaps pheasant from Sandringham or venison from Balmoral.

She would finish the day with a bowl of fresh fruit and was particularly partial to the white peaches grown at Windsor Castle, according to the royal insider, even having them sent up to her when she stayed at Balmoral.