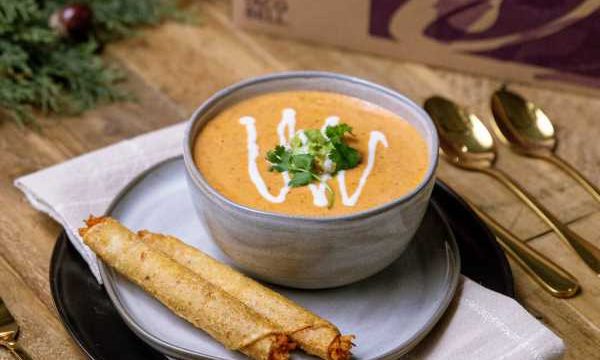 Thanksgiving is a tough time for fast food restaurants: one of the few days a year where people actually prefer the effort of preparing a delicious home-cooked meal over the convenience of haphazardly shoving food into their face while driving. How is a quick-service chain supposed to interject themselves into that conversation? By making themselves part of a home-cooked meal, of course!

We've seen White Castle offer up a recipe for making stuffing out of its signature sliders. This year, the chain even amended that stuffing recipe so you can use the newer, meat-free Impossible Sliders instead. So taking a cue from that playbook, Taco Bell has released its own recipe on how to transform a simple fast food dish into a conversation-worthy part of your Thanksgiving meal: Rolled Chicken Tacos Bisque. Who's got the blender?! (Seriously.)

"Every November at Taco Bell Headquarters, we host a Friendsgiving dinner to celebrate and give thanks to our best friends. But we don't serve our guests your typical, traditional Thanksgiving meal—we add a Taco Bell twist to every dish," the company writes on its blog. Apparently, each year features a new dish created by Taco Bell's food innovation team—previous offerings have included Nacho Fries Au Gratin, Mexican Rice Arancini, and Sauce Packet Flavored Compound Butter—but this year, they opted for a soup.

That said, the choice of Rolled Chicken Tacos is no accident: This soup is also a chance to promote the chain's newest limited-time menu item: Rolled Chicken Taco Party Packs. And—look at that—the recipe calls for exactly one order of 6 Rolled Chicken Tacos. From there, you'll actually have to hit a grocery store to grab the rest of the ingredients which include things like diced onion, garlic, chili powder, Mexican oregano, chicken or vegetable broth, fire-roasted diced tomatoes, heavy whipping cream, and cilantro. The dish will take about a half-hour to prepare and serves two as an entrée or four as an appetizer.

You can find the whole recipe here. If you do give it a try, Taco Bell suggests sharing it using #RolledChickenTacosBisque. However, the social media posts I want to see are from the people who bought a Rolled Chicken Party Pack, accidentally ate it before making the soup, and then tried to return their unused cilantro.