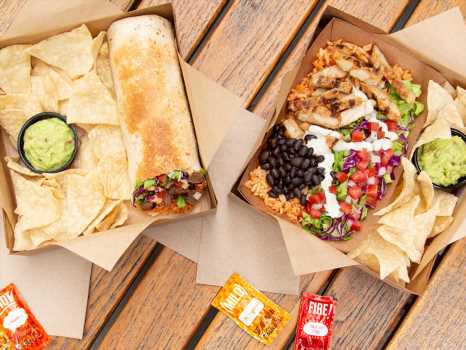 For the longest time, it’s felt like Taco Bell and Chipotle operated on separate planes of existence: Chipotle is where you line up behind other people in business casual attire to order a burrito bowl on your lunch break. Taco Bell is where you order a taco wrapped inside a quesadilla at midnight after enjoying some legally purchased recreational marijuana. But with some new menu items currently in the testing stage, it looks like Taco Bell is taking aim at Chipotle.

The first such “From Our Cantina” limited-edition offering is an avocado ranch bowl, showcasing some lighter fare. Looking similar to a tray of loaded nachos you might overpay for at a baseball game, this bowl is built on fresher and lighter ingredients. Grilled chicken is the star of the show, with black beans, purple cabbage, lettuce, and pico de gallo rounding out its rainbow of color. It’s served on a bed of seasoned rice and drizzled in (fittingly enough) a tangy avocado ranch sauce. And for once, it looks like chips and guac aren’t extra.

There’s more from the cantina than just that. The new Chipotle Grilled Burrito wraps up most of those ingredients, swapping out grilled chicken for steak and opting for a chipotle sauce instead of the avocado ranch. I get that “chipotle” is a pepper and not specifically a tex-mex chain, but it’s hard not to feel like Taco Bell has put them in the crosshairs with this one.

Regardless of how you feel about Chipotle or Taco Bell, it’s going to be hard to get your hands on these for the time being. They’ll only be available in the Cleveland, Ohio area (not exactly a part of the country that conjures images of a Mexican cantina) until some time in October. Hopefully things work out so they’re more easily available nationwide soon thereafter—and that Chipotle decides to retaliate by selling a fancy margarita.