Darren McGrady started cooking for the boys at Kensington Palace when they were seven and 10 years old. The budding chefs – or foodies – would come into the kitchen “all the time” when he was cooking.

As the children of Prince Charles and Princess Diana, not to mention the grandchild of the Queen, Prince Harry and Prince William would have had access to some of the most exciting cuisine the world had to offer.

However, their favourite childhood meal was surprisingly common, and is a beloved dish even among non-royals.

The dinner that filled little Princes Harry and William was Cottage Pie.

Darren McGrady told Delish: “If they saw me cooking this one, they knew it was going to be a fun one.” 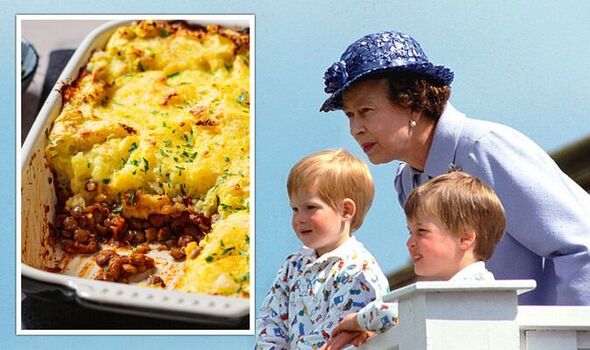 The royal chef explained that Cottage Pie is made from ground beef, onions, a little garlic, gravy browning, salt and pepper, some flour to thicken and broth, topped with some mashed potatoes.

This would be finished off with some cheese and coriander, making “the most incredible dish”.

As one of their absolute favourite, Darren would prepare Cottage Pie for the boys at least once every time they returned from school, Ludgrove in Wokingham.

The royal insider continued to explain that Harry and William could not keep out of the kitchen.

They would often wander in to ask for lunch, play hide and seek, or simply have a chat.

The youngsters would even occasionally like to cook, which Darren joked was a “worrying experience”.

Even though Harry and William loved a good, old-fashioned Cottage Pie, not everyone in the Royal Family had the same taste.

In another video, the former royal chef explained that the Queen absolutely hates one key ingredient that was key to her grandsons’ favourite meal.

On his YouTube channel, Darren revealed that HRH is not a fan of garlic, although Prince Philip was.

He stated: “The Queen doesn’t like garlic, we could never use it at Buckingham Palace.”

Darren also gave an insight into Princess Diana’s parenting of the two boys.

He explained that while the boys’ nanny was keen on them eating their veggies, for example getting enough cabbage and broccoli, Diana wasn’t as fussed.

Darren recalled her saying: “‘Oh, if they don’t want that they don’t have to eat it. They can go straight to burgers and hotdogs and things like that.

“‘And if they want to skip that all together, they can just have pudding.’ She was a real mum.”

However, the boys were “really good” when it came to food, according to Darren.

They never really wasted foods or were too fussy – although they always “made sure they had time for pudding”.