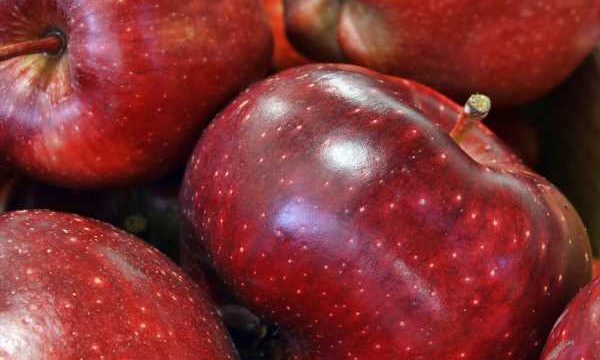 People love to hate Red Delicious apples. You can’t cook with them because they’ll fall apart, the skin requires extra chewing to break down, and the flesh is dotted with mealy craters. Biting into a Red Delicious apple is a guessing game. If you’re not careful, you’ll end up eating sad, brown pieces.

The “Red Delicious” moniker was not appointed to trick consumers. This isn’t a Greenland or Iceland situation. It’s been a popular apple for 125 years. It’s just that it's not longer what it used to be.

The great ancestor of all Red Delicious apples was first marketed by Jesse Hiatt, a Quaker farmer in Peru, Iowa. Hiatt dubbed the sweet, perfumed apple the Hawkeye, and sold it to Stark Bro’s Nursery in 1894. Under its new ownership, the Hawkeye became the Delicious. In his book Apples of Uncommon Character, Rowan Jacobsen notes that “the fruit kept well and had an inoffensive, pleasantly aromatic taste. Most of all, it was very sweet. What it wasn’t was solid red; instead, it had a light pink blush, reddish stripes, and a less pronounced strawberry shape, making it a pretty generic apple.”

After the Golden Delicious was developed in 1914, the Delicious apple’s moniker defaulted to Red Delicious. And it truly was delicious until the 1950s, when its success intersected with mass production. Taste was no longer top priority, giving way to efficiency and uniformity. Growers who grafted (cloned) Red Delicious apples sought out darker apples, yielding the unmistakable Red Delicious hue.

These same apples also featured thicker skin, which disguised bruises and made the fruit easier to ship. The Red Delicious that ensued was marketable, both to the industry and the consumers.

These grafted apples developed some undesirable qualities as well, such as a more open-celled texture that contributed to the fruit’s mealiness. And that same thick skin that helps the Red Delicious withstand shipping and sitting in cold storage for up to a year so well doesn’t create the most pleasant eating experience.

“The Red Delicious we have today is very much a different apple,” says Simon Thibault, journalist and author of Pantry and Palate: Remembering and Rediscovering Acadian Food. Today, it’s a victim of its own success.

Who, then, is buying Red Delicious apples? Institutions, such as schools and health centers, that need to satisfy nutritional needs. If there’s a basket of free fruit for employees to snack on at your office, chances are it’s stuffed with Red Delicious apples.

“The apple is the easiest, most ubiquitous thing that can be transported,” Thibault says. “It wasn’t regular consumers, it was large industries that were buying these things.”

The life cycle of a Red Delicious apple goes something like this: first, branch offshoots known as sports are propagated through a process called grafting. That offshoot eventually bears fruit, which is picked prematurely so it can ripen in cold or controlled storage. As soon as an apple is picked, it starts producing ethylene gas, which makes fruit ripen or rot. “[Ethylene is] why you don’t put bananas next to apples,” Thibalut says. “It’s part of the illusion of perpetual summers in retail spaces. You could probably make an argument that apples are the worst in this fable.”

Ethylene is also the catalyst for controlled storage, which either needs to be cold or ventilated enough to prevent off-gassing among the fruit. Those apples can stay there for up to a year before they’re shipped out to stores and cafeterias.

Other apple varieties have different standards. The Pink Lady, for example, must fully ripen on the tree before it’s harvested and has to be picked in a specific way. “Every stage of its grown and sales is regulated,” Jacobsen writes. Thibault, who grew up on a hobby orchard, remembers watching his father pick Honeycrisp apples. “There was a very particular way of taking it off the tree,” he says. The care that goes into these varieties doesn’t just affect their cost, but also the way consumers and retailers treat them. There’s an entire culture of expectations surrounding them, and it’s exactly what we lost in the Red Delicious.

That’s not to say that the Red Delicious is entirely bad. It’s a parent of varieties like the Empire, which is one of the top 10 sellers in the U.S., and the Fuji, which may very well be the most popular variety in the world.

“Outside of the United States, everyone knows that we live on Planet Fuji,” Jacobsen writes. “This is why more than 70 perfect of the apples grown in China are Fuji—and China produces about half the world’s apples, eight times that of the second-place United States.”

Last year, the Red Delicious apple’s 50-year reign as the country’s most popular apple finally ended, giving way to the Gala. Jacobsen predicts that the “zombie variety” will be forgotten in two decades, as “no one has planted Red Delicious in years.” But some farms still grow the heirloom Hawkeye, and if you’re lucky enough, you can try the original, and truly tasty, Red Delicious.

Even if you can’t access an orchard, or apple farmer, there are still ways to avoid unsuitable apples. Thibault recommends shopping for multiple varieties of apples rather than just one, so you can taste around and discover what you like best.

Another important thing to consider is seasonality. A seasonal apple is fresher, and will likely taste better. However, you can also use seasonality to judge when an apple will start going bad. Earlier season apples, which are harvested in August and the beginning of September, are especially delicate and should be consumed quickly. Later season apples will hold out longer.

No two apples are the same, no matter what the old saying “it’s like comparing apples to apples” may indicate. Some of them are best baked, while others won’t hold up if they’re cooked at all.

“Give yourself the liberty to accept that different things will create different textures and flavors,” Thibault says. “Then you can start to teach yourself what to pick.”