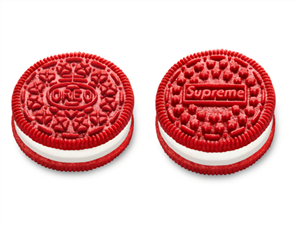 There are a lot of different variations on Oreo at this point—maybe too many. There’s been an insane proliferation of flavors over time, and so many different sizes of “Stuf” that you can buy a whole kit that collects them all. You might think those size variations explain why an ultra-rare “Supreme” Oreo is going for hundreds—even thousands—of dollars on Ebay, but it turns out the real story is very different.

In fact, the Supreme Oreo is a collaboration between the Nabisco brand and much-hyped streetwear company Supreme. Though the New York-based clothing retailer dates back to the mid-90’s, Supreme amassed an army of fans over the 2010s thanks to co-signs from rappers like Tyler the Creator and other figures who had amassed cultural capital.

Though most famous for shirts and other apparel that features their famous “Box Logo,” Supreme has become infamous in recent years for their willingness to put their name on pretty much anything. That’s ranged from North Face jackets to Metro Cards, to an assortment of objects you’d find at a construction site. Partnering with Nabisct to make a Double Stuf Oreo, which stamps the Supreme name onto a cookie in the company’s signature shade of red, seems to be the latest iteration of this “all Supreme everything” ethos.

And much like pretty much everything else the brand puts out, Zoomers with access to a parent’s credit card are eating it up—except maybe not literally in this case. After selling out almost instantaneously when the Oreos initially dropped in late February, the three-packs of Supreme Oreos sold out again just as fast this week. The fact that a lot of people are sitting at home in front of a computer probably didn’t help.

There are an army of hypebeasts who buy new Supreme products with the sole purpose of reselling them online for exorbitant prices, and these Oreos have so far proven no exception. Currently, there are more than 100 eBay listings for Supreme Oreos with asking prices of at least $125. One listing even goes as high as $20,000(!), listed by a seller with 93.8 percent positive feedback. That’s an impressive 666,566.67 percent markup from the original retail price. Supreme knows how this secondary market works well enough that they could’ve jacked up the price themselves, but they appear to get off on selling out their wares instantaneously.

Obviously, spending anything greater than a dollar or two on three Double Stuf Oreos is absurd. But there are definitely people out there who form their identity based around a brand they fetishize. Supreme’s mere proximity to creative artists and idolized celebrities over its history makes it an easy signifier to latch onto for those trying to understand their place in a chaotic world.

It’s therefore not the act of eating a special Oreo as much as owning it and showing it off for clout that matters. We may have an idea of what a normal Oreo should cost, but you ultimately can’t put a price on stunting for strangers on the internet—especially at a time when it's our primary means of contact with the outside world.