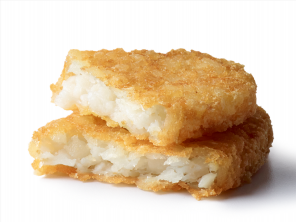 If you’ve ever tried them before, you’ll know there’s something special about the hash browns at McDonald’s. Somehow they manage to be both crispy on the outside and soft on the inside, with a perfect golden-brown color. And while we’ve covered all the little details that make McDonald’s Coke taste so much better than all the others, there’s just one secret to making the best hash browns.

The trick is an ingredient added to the oil used to partially fry the hash browns (and those famous french fries) before freezing them and shipping them to restaurants. From the very beginning, McDonald’s used to fry their french fries and hash browns (when breakfast items were added to the menu in the 1970s) in a mixture of cottonseed oil and beef tallow. It’s a delicious combination, but since beef tallow is a form of rendered fat, it’s also unhealthy and made the fries and hash browns very high in saturated fat.

In an effort to make their fried menu items a little healthier, McDonald’s switched to frying their potato sides with vegetable oil in 1990. But in order to give their hash browns and fries the same delicious taste as frying in beef tallow, they added natural beef flavoring to the oil. You can find it on the list of ingredients for both their hash browns and fries. This change is also why you might’ve noticed that McDonald’s fries started tasting a little different in the ‘90s, and why some people remember McDonald’s fries tasting better when they were children.

What is Natural Beef Flavoring?

This question is a little trickier to answer because it involves some complicated food chemistry. Basically, according to the McDonald’s menu, their natural beef flavoring uses hydrolyzed wheat and hydrolyzed milk as starting ingredients (which unfortunately means the hash browns and fries aren’t vegan).

Related: McDonald's Is Adding Donut Sticks to Their Menu for a Limited Time

To create natural beef flavoring without beef, food scientists have singled out the amino acids in real beef that give it its flavor. Since it would be way too expensive (and wasteful) to extract the flavor from beef without actually using any of the beef, scientists then found a way to recreate the same flavors without using beef, and instead using more common ingredients like wheat and milk.

How Hash Browns Are Made

Of course, more than just beef flavoring goes into making McDonald’s hash browns. It starts with fresh potatoes, which are inspected to make sure they meet McDonald’s quality criteria. Then they’re washed and peeled before being inspected again for any blemishes or imperfections. The next step in the process is a pass through a mechanical cutter, which slices the potatoes into strips.

After cutting, the potato strips are blanched in hot water for a few minutes, then dried and sliced again into the hash brown-sized pieces we’re used to munching on. Before taking on their distinct shape, the potato pieces are mixed with salt, pepper, cornflour, and potato flour. Then, once they’ve been shaped, the hash browns are partially fried in vegetable oil and beef flavoring before being cooled, frozen, and shipped out to restaurants.

You’ll still get fresh-fried hash browns at your local McDonald’s though—and since they’re on the all-day breakfast menu, you can order them at any time. When an order for hash browns comes in, your restaurant will then finishing frying them, so they arrive to you hot, crispy, and fresh.

Biting into them, you’d never guess that there’s so much effort and history behind McDonald’s hash browns and french fries. But now, the next time you’re skimming the dollar menu, you can have a new appreciation for those ultra-addicting hash browns and fries.