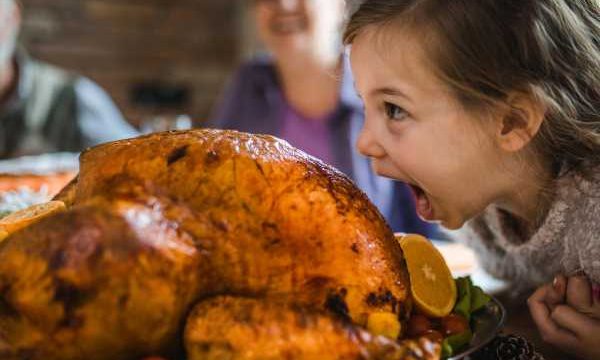 Thanksgiving, in the greater public consciousness, is a time of joyful gathering, delicious foods and—if you’re lucky—the kind of turkey-induced nap that leaves you feeling ready to tackle a plate of leftovers when you wake up. In reality, though, Thanksgiving can be more complicated than that. Aunts bickering with cousins over politics and religion, surly teens glued to their iPhones, and coordinating the schedules and needs of a large group of people can put a strain on anyone, but particularly the Thanksgiving host. And while I can’t tell you how to make peace between testy family factions, I can offer up one way to ease tensions when mealtime rolls around: Designate a table for the kids.

I know, I know. There are some people who believe that making a table specifically for children is an invitation for chaos. There are others who think that a five-year-old needs to sit at the adult table, use their salad fork properly and have a well-formed opinion about the impacts of globalization. I get it—my parents definitely thought the latter. But when it comes to my own home, I’ve found that a kids table not only keeps everyone calmer and happier, but it also helps form stronger relationships between both children and adults.

RELATED: These are the Worst Possible Ways to Thaw a Turkey

Creating an ideal table for a children’s Thanksgiving is similar to the adult version—just a little bit more playful. Consider placing the table in an area that’s within eyesight, but perhaps just far enough away for kids to feel a bit of independence. If your house has an open floor plan, for example, have the adult dinner in the living room and the kids set up in the kitchen. (Bonus points for easy clean up.) The age range for the kids table is something that’s often up for debate, but as a general rule of thumb, a 14-year-old should probably be ready to make the transition to the adult table. Don’t worry, though, about breaking kids into “younger” and “older” tables. There’s a great deal to be gained from children of various ages listening to, learning from and playing with one another—a thing that doesn’t happen quite as often as it did in generations past.

Before the meal begins, create a “trail mix station” on the table you’ve designated for the kids. Several small bowls of trail mix classics—from dried fruits, to chocolate chips, to almonds and pretzels—complete with small paper bags for storing their pre-meal treats. This easy set-up will allow them to mix and match their own personalized trail mix, and help keep little hands occupied (and fed!) until the meal gets underway. Using festive, non-breakable plates—like these inexpensive, turkey-adorned Melamine plates—takes the threat of your great-grandmother’s china getting shattered (literally) off the table. And when it comes to beverages, sparkling apple or grape juice is an ideal way for kids to feel as celebratory and adult as their parents at the big(ger) table drinking wine.

Interactive dinnertime activities also help to create a seamless kids’ table experience. Instead of a traditional table runner, use a large piece of craft or butcher paper, complete with a set of crayons, to allow doodling and drawing throughout the course of the meal. (This also makes a great keepsake.) And having each child use a special card to write down a “gratitude list” makes an endearing activity to read aloud, with the whole family together, later in the evening.

And if there ends up being a food fight at the kids’ table and a nephew has sweet potato caked in his hair at the end of the day? Well, that’s OK, too. After all, life isn’t really like that ubiquitous Norman Rockwell Thanksgiving painting—it’s a little bit messy.