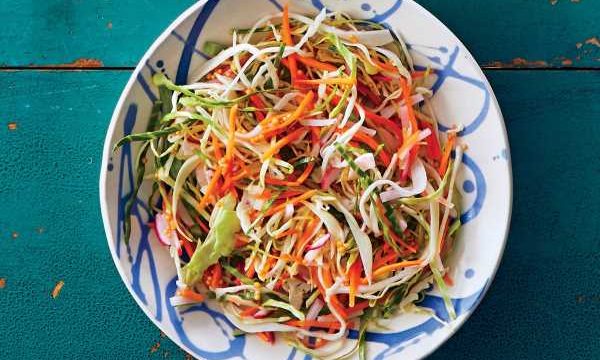 My grandmother Jonnie was a fly-by-the-seat-of-her-pants sort of cook. She was famous for never making a dish the same way twice. Even the classics, the family favorites, the traditional holiday dishes: while they always landed in the same general flavor place, they were never identical. And usually, if complimented on a particularly great version of something she’d made before, she would not be able to tell you what she had done differently.

Jonnie loved to do what she called “doctoring,” adding a bit of this or that to some store-bought item, whether it was a dollop of sour cream to a store-bought creamy salad dressing, or some maple syrup to bottled barbecue sauce, or a pinch of this or that to a canned soup. Nothing went unadulterated at her house. I once watched her pillage the condiments at a Wendy’s salad bar and zhuzh up a bowl of their chili until it was nearly unrecognizable.

But for all of her freewheeling foodways, she was strict about only one thing: food safety.

Watch: How to Make Pickle Coleslaw

Having survived both the Great Depression as a child and rationing during World War II, not to mention a mother who was a truly terrible cook, she was fastidious about only serving the best quality food. As she embarked on a small catering business out of her home in her late 60s, her commitment to food safety was on par with that of any Michelin-starred chef.

I inherited this trait from her, reinforced by the fact that I have ongoing issues with my gut, which is sadly prone to ill effects from improperly prepared or stored food. My husband might lovingly call me the food police, but I’ll take it. I have no interest in making myself or anyone else sick with my food. I keep hands and counters and tools clean, I don’t cross-contaminate, and I am a stickler about presenting hot food hot and cold food cold, and anything that sits out too long gets binned at the end of the event.

Which means that while I make a killer classic mayo potato salad, and an awesome creamy slaw, you will almost never find me serving them at an event that requires an outdoor buffet unless I can keep them on ice. Nothing is more likely to bring food-borne illness to your backyard barbecue than a dairy- or mayo-based dressing in warm weather.

Which means that whether it is potato or pasta or rice salad, or a slaw of any ilk, mine is going to be the one with the acid-based, dairy-free dressing. But even better than knowing the diners are safe? I love how these salads and slaws stand up to the dishes they are served with. Acid tends to be lacking a bit at these kinds of gatherings, and all that grilled meat and sweet corn need some punch to brighten the palate. Whether it is a lime and cumin dressing on my rice salad, or a traditional German-style potato salad with white vinegar and red onion, I love the wakeup call they give to the plate.

For slaw, I most often do this vinegar, ginger, and soy version below. Its punchy sweet/sour tang works really well with anything grilled or smoked, from a basic hot dog to an all-day brisket. The slaw itself varies depending on what is available, with anything from the shredded cabbages and carrots to grated broccoli stems or jicama, shaved fennel, and even green apple. Sometimes I garnish it with roasted peanuts or slivered almonds or toasted sesame seeds or even fried chow mein noodles for a little crunch. But the dressing remains the same.

How to Make It
Shake all ingredients in a jar until well emulsified. Stores in the fridge for up to a week.