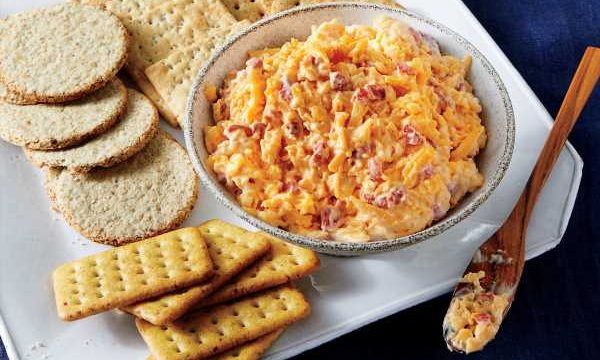 It wouldn't be an exaggeration to say that Southerners are crazy for pimiento cheese. We put it in sandwiches, slather it on crackers, melt it in grilled cheeses, and find endless creative ways to reinvent this classic spread. I first tried pimiento cheese a few years ago, when I'd just moved to the South. One taste and I was hooked. Each week, I scope out the artisanal pimiento cheese stand at my local farmers’ market and snag a sample. Currently, I have three different containers of pimiento cheese in my fridge.

As a vocal pimiento cheese enthusiast, I was bestowed the honor of conducting Southern Living’s official pimiento cheese taste test. (Should this be deemed a national holiday? I think yes.) We tasted five popular store-bought pimiento cheeses to see which best resembled a homemade version of the South’s favorite dip.

First off, let me say that pre-packaged grocery store pimiento is no match to small-batch, locally-produced, or homemade pimiento cheese. I try to make my own pimiento cheese each week—classic pimiento spread on crackers is my go-to midday snack and favorite easy, yet impressive potluck dish. But some days I just don’t have the time. Enter store-bought pimiento.

To determine which pimiento brand tastes like the real deal, we conducted a blind taste test of five popular pimiento cheeses that you can probably find at your local supermarket. We tasted Price’s Pimento Cheese Spread, Trader Joe’s Pimento Cheese Dip, Original Palmetto Cheese Spread by Pawleys Island Specialty Foods, Publix Cheese Spread with Pimentos, and Ruth’s Original Pimento Spread. I spooned all the cheeses into bowls ahead of time to ensure the testers didn’t know which was which. Then, with trusty Saltine crackers as the vehicle for the cheese spreads, Southern Living editors tasted all five pimientos and recorded their comments. Here’s what we thought.

This pimiento cheese spread touts the brightest orange color of the bunch, and it packs an intense cheese flavor to match. Similarly, the cheese spread is studded with pimiento peppers; the high quantity of pimientos gives the cheese a strong sweetness and peppery aftertaste.

Testers commented that the taste of this spread is milder than the other pimiento cheeses, which can likely be explained by the ingredients. The first ingredient listed on the container is “Imitation Salad Cheese;” I’m not sure quite what that means, but it probably can’t rival fresh, extra sharp cheddar. At only 80 calories per serving, Ruth’s Pimento Spread is the lowest in calories, so it’s a good choice if you’re looking for a healthier option. But hey, if we’re going to have pimiento cheese, we might was well indulge.

As a professed Trader Joe’s super-fan, I’ve long awaited the day that my favorite market would release its very own pimiento cheese. So you can imagine my excitement when I discovered that TJ's would introduce Pimento Cheese Dip as a new product in 2019. Trader Joe’s is known for its high-quality cheese selection, and unsurprisingly, the rich cheddar cheese in its Pimento Dip did not disappoint. One tester remarked, “It tastes like fancy aged cheddar!” I concur. Made with extra sharp cheddar cheese and roasted pimiento peppers, this cheese dip packs a strong, yet not overwhelming flavor. Many pimiento rebels advocate for swapping the namesake pimientos out for roasted red peppers, but Trader Joe’s may just have found the best of both worlds. The brand’s recipe uses roasted pimientos to give its cheese dip a deep, dimensional flavor without completely abandoning tradition and ditching the pimientos.

One important difference to note is that this is a pimiento cheese dip, rather than a spread, which means its consistency is a lot looser than the other cheeses we tried. The texture is slightly thicker than queso, but thinner than a classic pimiento cheese spread. It’s not your traditional Southern pimiento, but it would taste great heated up with tortilla chips for dipping. Throw in some chorizo and you’ve got yourself some Southern pimiento queso.

Placing as a close second, Price’s Pimento Cheese Spread won over the testers with its classic flavor and thick-cut shreds of cheddar. On the side of the container, a small paragraph explains the history of Price’s Pimento Cheese—the traditional family recipe first rose to prominence in the 1950s, and today, it’s become a widespread grocery store staple.

What sets this pimiento apart? It’s branded as “sweet and tangy” and certainly lives up to those expectations. Multiple testers observed that this spread looks fresh and homemade. Taste-wise, it's characterized by a sweet bite and a bright hint of tang. Price’s spread includes both pimientos and red bell peppers, maintaining the classic pimiento sweetness while adding bell peppers for depth of flavor. A few testers noted hints of relish and pickle flavor, which can likely be explained by the distilled vinegar added to the cheese spread. Overall a solid, classic choice.

Ah, Palmetto. It’s the top-selling pimiento cheese in the US—its web domain is literally www.pimentocheese.com—and as expected, this classic pimiento is the runaway favorite. With a bright orange lid and a Comic Sans-like font advertising “The Pimento Cheese with Soul!”, Palmetto Cheese Spread looks—and tastes—homegrown. Originating in South Carolina's Lowcountry, this specialty cheese is now sold in 49 states at over 9,200 locations, so no matter where you are in the country, you too can get a taste of authentic Southern pimiento cheese. The company produces three signature flavors: original pimiento, pimiento with jalapeños, and pimiento with bacon. While the jalapeño version is a favorite amongst our editors, for the sake of standardization, we used original for this taste test.

The primary ingredients of Palmetto Pimento are sharp cheddar cheese, mayonnaise, cream cheese, and pimentos, creating the legendary cheese spread that many of our testers recognized instantly. “This has to be Palmetto,” one Southern Living editor said, commenting on the spread’s pale orange color and thickly-grated cheese. “I’ve passed this off as homemade too many times to count,” she laughed. The cheese does taste homemade: It boasts a balanced cheese-to-mayonnaise ratio and a sharp cheddar taste with a little hint of heat. But don’t just take my word for it. Here are some comments from our editors.

“This is the way pimiento cheese was meant to taste. A gift from the good Lord above to anyone who is inept in the kitchen.”

Not convinced? Try a spoonful of Palmetto Pimento for yourself. Before you know it, this cheese will become your new favorite party snack.