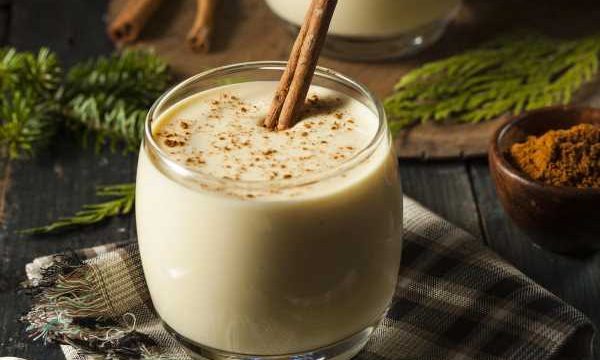 Few things scream “Christmas” like a cold cup of eggnog. If you’ve ever wondered just what makes the festive drink so darn delicious, you’ve come to the right place:

Eggnog is a rich, dairy-based beverage that is traditionally served around the holidays. Made with milk, eggs, cream, sugar, and seasoned with spices like nutmeg, the drink is usually served chilled.

Often, but not always, whiskey, sherry, or brandy is mixed with eggnog to give it a boozy kick.

Eggnog comes from a hot and milky British beverage from the Middle Ages called “posset.”

Posset, which was made with hot milk curdled with wine or ale, was thought to be a cold and flu remedy.

Monks in the 13th-century were known to mix eggs with their posset. Since milk, eggs, and sherry were typically reserved for wealthy people, eggnog was frequently used to toast prosperity and good health, according to Time.

The drink made its way to the U.S. sometime in the 18th-century. Brandy and wine from overseas were heavily taxed, so Americans took to spiking their eggnog with rum, and eventually bourbon or whiskey.

The drink quickly became very popular in the States. Even George Washington served a similar libation to guests on special occasions.

Somewhere along the way, eggnog became tied to Christmastime.

Eggnog-like drinks are popular all over the world:

Most homemade eggnog recipes call for raw eggs and therefore could put the drinker at risk for salmonella.

Many people believe that the alcohol included in the drink is enough to sterilize the infected eggs—however, this is not true: Eggnog tainted with salmonella infected more than 150 residents and staff at a New Jersey nursing home in 1982, killing four people.

You can avoid eggnog-induced salmonella by ensuring that your drink was prepared with pasteurized eggs or a cooked egg base (heat eggs and milk on the stove while stirring constantly to keep the mixture smooth).

If you’re worried you’ve consumed unsafe eggnog, watch out for these symptoms:

Symptoms appear a few hours to four days after eating the contaminated products. Call your doctor if your symptoms last more than two days, you’re dehydrated, or if your fever exceeds 102°.

Eggnog as a Flavor

Over the years, eggnog’s distinctive taste (a mixture of cinnamon, nutmeg, and vanilla) has taken on a life of its own. All sorts of holiday treats and beverages are flavored to taste like eggnog these days, from Starbucks lattes to beers.

The thick drink is actually quite useful as an ingredient (these Chai Tea Eggnog Cookies are a testament to that) and it’s often used to give desserts a festive flair.

How to Make Eggnog

Of course, perfectly delicious prepared eggnog is available by the carton during the holiday season. But where’s the fun in that?

Here are some tips and tricks to ensure your next batch is tasty and safe-to-drink:

Try out one of our favorite eggnog and eggnog-inspired recipes this holiday season:

Hungry for more? Check out our 20 best eggnog-sweetened desserts.