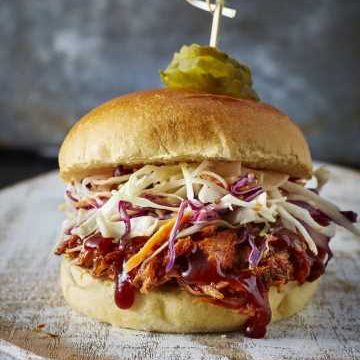 Lovers of pulled pork and shredded chicken know that, when seasoned correctly, these ingredients can take on a wide range of flavors—salty, smoky, sweet and savory, to name a few. But those slow-cooked, staple proteins aren’t often described as fruity, regardless of whether they appear in chicken tacos or in barbecue sandwiches. So it might come as a surprise to some home cooks to discover that the familiar flavors and textures found in shredded meat can be achieved without using any animal products at all. In fact, you just need a specific fruit—one that, until fairly recently, couldn’t be found in major grocery stores, let alone in the produce aisle.

That meat-like substance is jackfruit, a native to Southeast Asia and one of the largest known fruits in the world. It’s commonly used as a major ingredient in a wide number of dishes, and can grow in size to weigh 120 pounds. The jack tree also produces more than a hundred of its fruits throughout the year, and those green, spiky orbs are edible at every stage of their development, meaning that jackfruit also yields a number of different textures when prepared at different stages of ripeness. In some countries, like the Philippines, ripe jackfruit is often eaten as dessert—for example, with shaved ice and coconut milk. At its unripe stage, however, jackfruit takes on a shredded meat-like texture when cooked down and mashed with the fork, making it a perfect substitute for animal protein in dishes like stews, stir-frys, curries, and more.

WATCH: How to Make Jackfruit Taquitos

For those unfamiliar with jackfruit, the fruit can be not only hard to find, but difficult to tackle. In the US, jackfruit can most often be found canned, either in syrup or in water, in specialty aisles and in stores serving Southeast Asian communities. Recently, however, some shoppers may have stumbled upon, pre-marinated packages of jackfruit in major grocery stores. By creating these ready-to-heat offerings and already seasoned, companies like Upton’s Naturals and The Jackfruit Company, are attempting to widen jackfruit’s appeal in the US.

Dan Staackman, founder of Upton’s Naturals, said that Sri Lankan jackfruit curry was actually the first jackfruit dish he and company vice president Nicole Sopko sampled. They tried it at a Madison, Wisconsin restaurant, and instantly were smitten by the meat-like product. However, given that jackfruit is still mostly sold in cans at specialty grocery stores, and can still be difficult for newcomers to work with, Staackman and Sopko began brainstorming how they might make the ingredient more accessible to American cooks.

“We had it in curry and just kind of fell in love with it, and we checked it out on the internet and saw that people were making barbecue sandwiches and tacos with it,” he said. “But the only way to get it was in these cans, which normally have preservatives and are loaded with sodium. We kind of thought that there had to be some better way to get that and to make the product more user friendly.”

Unlike canned jackfruit, which can require hours of slow cooking to break up into a more shredded texture, Upton’s Naturals’ products only need to be heated up for a short amount of time before they are ready to serve. The jackfruit pieces have also already largely been broken up into meat-like strands, but breaking the pieces of fruit apart a bit further is easy to do, especially in skillet preparations.

Presently, Upton’s Naturals sells slightly pre-cooked jackfruit in a number of marinades, including Bar-B-Que and Thai Curry. Their Chili Lime Carnitas jackfruit, which made for perfect “chicken” quesadillas when we tested it, is one of their most popular flavors, Staackman said.

“The way we have it set up is that it’s basically marinating in that pouch its entire shelf life. It’s precooked a little bit, so you pretty much just need to dump out the pouch and tweak the seasoning if you like,” Staackman said. “Otherwise, just cook it down a little bit and you’re ready to go.”

To source the jackfruit used in Upton’s Naturals’ products, the company says it works with a number of family farms in Thailand that grow jackfruit. Those partnerships are essential, since picked jackfruit only stays fresh for up to 48 hours, making it difficult to ship in its raw form. The relationship has proved mutually beneficial for the farms as well, Staackman said. Since most farmers are hoping to produce jackfruits of prize-worthy sizes, a number of the tree’s fruits are culled before they are ripe to make room for larger specimens. By turning these unripe jackfruit into easily prepared meat substitutes, Upton’s Naturals is able to buy some of the fruit that might have otherwise gone to waste.

The difficulties of working with raw jackfruit don’t end at their short shelf life. Preparing the fruit also requires intensive amounts of labor. On the inside, a jackfruit is filled with fleshy pods and sticky juices, sort of like giant pomegranate. Peeling away that flesh takes time, but it yields the substance that many jackfruit dishes are made out of. Since the Upton’s Naturals’ jackfruit comes pre-processed, picking apart the fruits’ pods is a process that consumers won’t have to deal with.

“It’s quite tedious and messy. There’s a lot of natural latex in jackfruit, so you need to have an oiled knife on standby to be able to get through it most of the time,” Staackman said.

Staackman said the seeds inside the fleshy pods are also edible once a film around the outside is removed. When the jackfruit is ripe, these seeds can be roasted or boiled, and taste almost like potatoes. In the Upton’s Naturals products we tried, those seeds contained in the unripe plants, sliced thinly, had a texture that pleasantly reminded us of boiled peanuts.

Of course, for meat lovers, the idea of eating a barbecue sandwich filled with fruit instead of pork might seem strange; Staackman encourages skeptics to give jackfruit a try, though, and to get creative with potential preparations. The company’s unseasoned jackfruit, which can be bought in bulk, works in any dish that normally calls for shredded meat, and the pre-marinated variations can be enjoyed a number of ways as well. For example, Staackman has found that the Thai curry version of his company’s products go especially well when prepared as spring rolls with rice paper.

“There’s no part of a chicken that you slice off the bone and it tastes like a taco. You’ve got to season it. In this case it’s literally just doing those same things to a fruit,” Staackman said. “It happens to have a texture that’s kind of like meat, and if you like garlic, onion, and chili peppers and cumin, or tomato paste and sugar and a little smoke, you’ll probably like these things.”