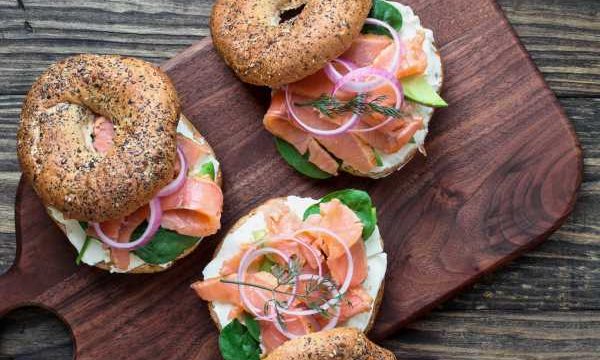 Lox is so much more than a salty bagel topping. Here’s what you need to know:

What Is Lox and What Does It Taste Like?

Lox is a fillet (or strip) of brined salmon.

Brining—preserving food with salt—is similar to curing, but takes a lot less time.

Lox, which is commonly often served on bagels with cream cheese, was traditionally made from the belly of the fish. These days, other parts of the fish can be used.

Smooth, velvety, and buttery, lox tastes a lot like other types of salmon. However, it is saltier because of the brining process.

“Lox” and “smoked salmon” are often used interchangeably, but they’re not the same.

The difference between lox and smoked salmon is how they are prepared.

Lox is brined, but never cooked or smoked.

Smoked salmon, meanwhile, is cured or brined and then smoked. It can be cold-smoked (slowly exposed to smoke for a few days, but is never fully cooked) or hot-smoked (cooked all the way through, like smoked meat).

Because lox is never cooked, it remains smooth, silky, and translucent. Smoked salmon, through the smoking process, becomes slightly tougher. It looks and tastes more similar to baked or grilled salmon.

What Is Gravlax—and What Does It Have to Do With Lox ?

Gravlax is the Scandanavian method of preparing lox. The salmon is coated with a spice blend of dill, juniper berry, salts, sugars, and liquors before it is brined.

The word “lox” comes from the Yiddish word for salmon, “laks.”

Brining salmon is a Scandanavian tradition, but it was also popular among Eastern European Jews.

Some of these people immigrated to the U.S. and brought their affinity for brined, cured, and smoked fish with them.

The Transcontinental Railroad is what really popularized lox in the U.S., though, according to The Mountain Kitchen.

Trains began to transport salted salmon from the Pacific coast to other parts of the country, including New York (which is where many Eastern European immigrants settled in the late 1800s).

While brined salmon has Scandanavian roots, bagels and lox is a uniquely American dish.

“[Bagels’] arrival was greeted with curiosity and no small amount of disdain. Seventy years after the bagel arrived, more or less, in North America, it had drifted in so many directions that the term ‘authentic’ had become suspect,” wrote Heather Smith in a 2012 Meatpaper article. “By the 1950s, ‘bagels and lox’ had become an insult—a disparaging term used by Jewish immigrants to describe their counterparts who had become too American. Bagels and lox had no analogue in the old country. It was food as collage—pickled Italian flower buds and Scandinavian-style fish heaped over English-style cheese. It had traveled as far as the salmon, and become something entirely new in the journey.”

How to Store Lox

Lox will last 5-8 days if it’s kept tightly wrapped in the fridge. You can also freeze it for up to two months.

Check out on of our favorite recipes that highlights the salty salmon: