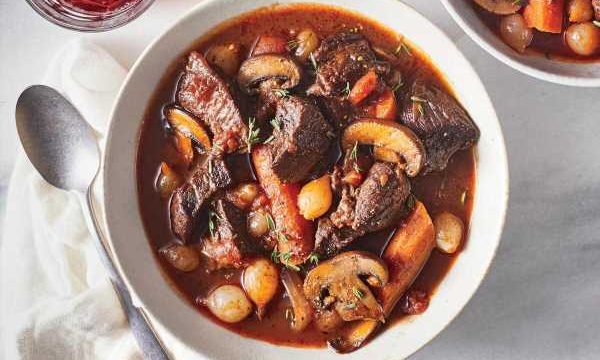 Two-level cooking? Isn’t one level hard enough? Why are you doing this to me?

I completely understand both your questions and your reticence. It does seem  like I’m asking you to add another whole step to your cooking at a time when most of us are looking to simplify things. But hear me out, and I think you’ll find that what I’m actually suggesting will not only NOT complicate, but rather simplify, and remove some stress.

The easiest explanation of two-level cooking, I believe, is an example or two. If you’re sauteing a breaded chicken breast in a pan on the stove, chances are your breadcrumbs will be perfectly browned before the chicken is cooked through. And if you keep sauteing, the crumbs will burn. The solution? Slide the (oven-safe!) skillet into a 350° oven to finish cooking while you move on to other things. Or if you want to make a savory, slow cooked stew—you might start by browning and deglazing some of the ingredients on the stove top in a Dutch oven, and then finish the whole thing in the oven. Essentially, this two-level approach involves using two cooking methods in order to achieve the best final product. Chances are that you already, to some extent, employ two-level cooking in your own kitchen. My hope is that you’ll consciously choose to use the technique more frequently.

You can also turn this technique inside-out by cooking a (usually) larger cut of meat low and slow in the oven, letting it rest, and then creating the perfect crusty sear on the stove top in a matter of minutes with no risk of overcooking. This method is often referred to as a reverse sear.

WATCH: How to Reverse Sear a Steak

Another variation on two-level cooking is blanching and shocking (a relatively quick dip in boiling water followed by  “shocking” the boiled items in an ice water bath to immediately stop the cooking) your vegetables in advance, and then they’re essentially ready to go… all you have to do is heat them in a hot pan with oil or butter and the seasonings of your choosing whenever you need them.

When it comes to pasta, many traditionalists will tell you to “finish your pasta in the sauce.” Guess what? That’s two-level cooking! Boil your pasta until it’s almost, but not quite, done. And then, saving some of that gorgeous, starchy, salty pasta water, add the pasta to whatever hot sauce you’re making and let the two get acquainted, just until the pasta is done. Add a bit of the pasta water if you feel the need to loosen up the sauce.

For those of you lucky enough to have an immersion circulator, colloquially known as a sous vide machine, two-level cooking can change perfectly cooked but oddly pale looking meat into something spectacular. Just remove it from the bag, let it rest a moment, and then sear it quickly in a very hot pan. This may be the greatest expression of two-level cooking. You can have the meat completely cooked hours in advance. The searing takes moments, and dinner’s on the table.

I don’t recommend this technique with things that cook in moments like eggs or very delicate fish. But with heartier meats and vegetables, learning how to employ two-level cooking to your advantage is like having an extra set of hands in the kitchen.