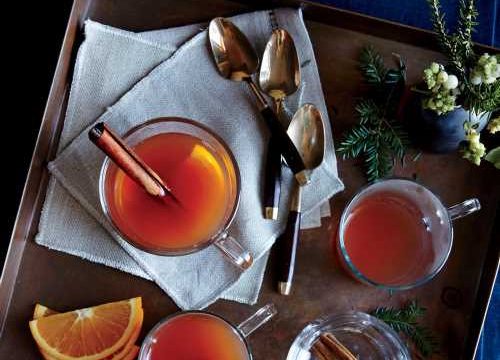 As the nights start to creep toward winter, my mind has increasingly started turning toward visions of apple, oranges, pears, cinnamon and clove. So even though the weather outside is not all that cold yet, and Halloween hasn’t even passed, I decided a huge vat of wassail is exactly what’s needed to increase the fall-like chill in the air.

Wassail—or mulled cider—is a delicious fall and winter tradition that’s especially made around Christmastime in a number of European countries. Roughly translated from Old English or Old Norse, the word means “be hale,” or be hearty and healthy—a well-wishing sentiment that was spread when townsfolk would go wassailing during the apple harvest. Wassailing principally consisted of two acts: going door to door and singing, which became the tradition of caroling, or going to orchards to sing to the trees, in the hopes that it would help them produce better apples. It’s unclear if the latter tactic ever resulted in a better crop, but after you make wassail at home, you’ll understand why singing to the trees seemed like a good idea.

While wassail contains apple cider, it has a lot more depth of flavor than any variety you could buy in a jug at the store. And it has the distinct advantage of using up any aging fruit you have in the house, as well as making your home smell like Christmas morning. There’s really no downside to this warm beverage, except perhaps that you have to wait for the spices to mull in the drink before you can dip out the first cup.

To make wassail, buy a half gallon of apple cider, or make your own. Pour the cider into a big pot. Next, take two apples and push whole cloves into them. I usually do at least two rows going all the way around the apple, but you can use as many as you’d like. Place the apples in the apple cider. If you have any pears, feel free to toss those in as well, but no need to push cloves into them.

WATCH: How to Make Caramel Apples

Next, add two cups of orange juice and one cup of lemon juice to the cider. You can use freshly squeezed here, if you happen to have some oranges and lemons lying around, but store-bought is also fine. Grapefruit juice or even limes can also be a nice addition, although oranges and lemons are more traditional.

Lastly, add some mulling spices. Around this time of year, you can buy packs of mulling spices from most grocery stores, but if you happen to have at least two sticks of cinnamon, whole cloves, ginger, and juniper berries in your spice cabinet, you can skip buying a spice pack. Turn the heat on low, and let the drink simmer, stirring occasionally, for at least an hour. The longer it mulls, the stronger the wassail will become.

Once the wassail is ready to serve, the hardest part is separating out the spices and pulp.  A strainer or cheesecloth is useful here. If you’re serving a party, it might be best to strain the entire drink before serving, but otherwise, the spices can easily be separated out on a per-cup basis. After you strain the spices, you’ll also have the chance to spike the drink, if alcoholic libations are desired. Traditional recipes call for the wine or rum to be added to the pot with the cider while the spices are mulling, but both options will still taste amazing when added to a finished, virgin version of the drink. Whiskey is also a great choice for this beverage, especially if you have a cinnamon or honey variation.

Wassail has endured as a fall and winter tradition because it’s such an easy communal drink to make. All it takes is some citrus, a few apples, copious spices, and time. When shared, it can bring warmth and seasonal cheer to any gathering. Once you’ve gotten the hang of making wassail, you’ll want to keep it on hand more often; it will become the de facto replacement for any simple, store bought cider that used to grace your autumnal tables.

Veganuary: 4 things you should know before switching to a plant-based diet