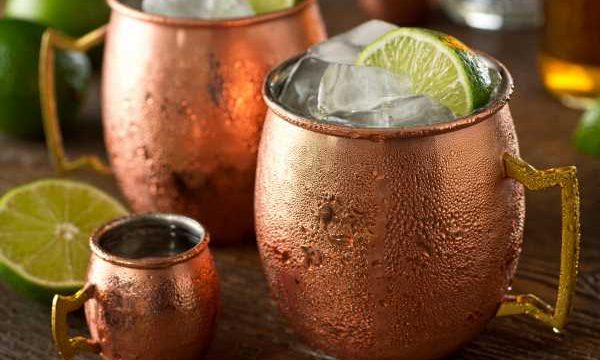 Everyone with a taste for vodka or access to Instagram has seen a Moscow mule served in a traditional copper mug. But have you ever stopped to wonder why that particular drink is so commonly associated with that particular vessel? We did the research so you don’t have to.

What Is a Moscow Mule?

A Moscow mule is a popular cocktail made with vodka, ginger beer, lime juice, and often garnished with mint. Though the drink is—for obvious reasons—tied with Russia, it’s actually an American invention. A few variations on the traditional recipe exist, like the Kentucky mule (made with bourbon) and the Mexican mule (made with tequila).

This History of the Moscow Mule

According to legend, the Moscow mule is the result of the chance meeting of three or four (depending on who you ask) down-on-their-luck entrepreneurs. The history is a bit murky, as these kinds of things often are, but certain aspects of the story remain the same in all the versions we could find:

John Martin, head of Heublein & Brothers, purchased Smirnoff for $14,000 sometime in the 1930s. The business venture was a risky one—American consumers showed little interest vodka at the time, preferring to sip whiskey and beer.

Martin’s friend found himself in a similar situation around the same time. Jack Morgan, who owned Cock ‘n’ Bull bar in Los Angeles, had taken a leap of faith and launched his own brand of ginger beer. He and his bartender, Wes Price, were having trouble unloading the product.

As the three men were commiserating over drinks one day, Sophie Berezinski walked into the Cock ‘n’ Bull with a sad story of her own: The daughter of a copper manufacturer in Russia, Berezinski had recently immigrated to the United States with 2,000 solid copper mugs. She planned to sell the mugs once she was settled in the land of opportunity, but was having no such luck.

The group shared their tales of woe with one another and, presumably, a gigantic lightbulb appeared above their heads. The rest was history.

Other variations of the story exist, of course. In one, Berezki was replaced by Osalene Schmitt, Morgan’s girlfriend who had inherited a business that made copper goods.

One thing, though, is undeniable: The copper mug is essential to a traditional Moscow mule.

Why Are Moscow Mules Served in Copper Mugs?

Moscow mule purists know that tradition isn’t the only reason the drink is served in a copper mug: The cold metal insulates the temperature of the chilled ginger beer, keeping the cocktail cool and refreshing.

Some experts say that the mug enhances the individual flavors of the ginger beer, vodka, and lime, according to HomeWetBar.com. The copper begins to oxidize when the vodka touches the walls of the mug, they say, which slightly boosts the aroma and enhances the taste of the vodka.

In 2017, Iowa’s Alcoholic Beverages Division warned that, in keeping with Food and Drug Administration guidelines, copper should not come into contact with acidic foods with a pH below 6—that includes vinegar, fruit juice, and wine.

“When copper and copper alloy surfaces contact acidic foods, copper may be leached into the food,” according to the notice.

Symptoms of copper poisoning include abdominal pain, diarrhea, vomiting and jaundice, according to the National Institutes of Health. “Sudden (acute) copper poisoning is rare,” NIH says. “However, serious health problems from long-term exposure to copper can occur. Severe poisoning can cause liver failure and death.”

So should you throw out all your copper mugs—just to be safe? Probably not.

While the aforementioned 2017 press release definitely caused a bit of a stir (we even wrote about the warning when it was released), many experts agree that there’s likely nothing to worry about.

“I find the press release to be chemophobic fear-mongering,” Trisha Andrew, assistant professor of chemistry and chemical engineering at UMass Amherst, told HuffPost.

“Any time you have any liquid in contact with a surface, there’s a possibility that the container is going to be dissolved a little bit into the liquid,” Andrew told HuffPost. “With glass, the rate of dissolution is so slow that you’ll never see it in our lifetime.”

So, while it’s best not to only eat and drink from copper plates and mugs, an occasional Moscow mule probably won’t hurt.

How to Make a Moscow Mule

Making a traditional Moscow mule couldn’t be easier—all you have to do is combine vodka, ginger beer, and lime juice in a mug (or glass, if you’re still worried about copper poisoning).