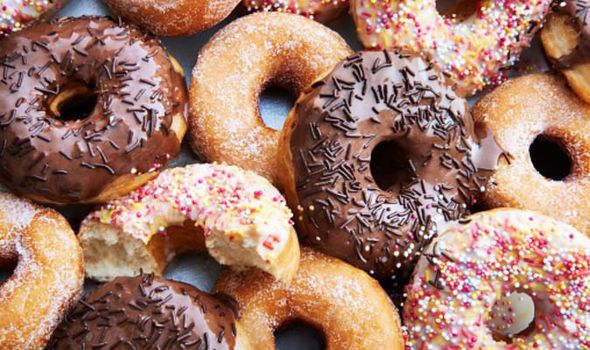 Sweet snacks and dishes can shut down important signals which would normally tell us we have had enough to eat, scientists have found. Sensors in the mouth become dulled from sending fewer messages to produce a neurotransmitter known as dopamine, which plays a key role in the reward system. The process is thought to lead to people piling on pounds as they eat more.

Scientists at the University of Michigan found that feeding fruit flies a high-sugar diet reduced and delayed the activity of their neurons. The insects are used in health research as they share many genes with humans.

The neural circuits fruit flies use to process the taste of sugar also involve dopamine.

So the researchers bred flies with a genetic marker in the neurons, so they could observe the process.

When the neurons activated normally, the flies ate the equivalent of a single cookie even when they were offered an entire box.

But when they were fed a high-sugar diet which had inhibited the process the flies gorged themselves for hours. Dr Monica Dus, assistant professor of molecular, cellular and developmental biology, who led the study, told how the brain was prevented from receiving messages that enough food had been eaten.

She said: “On a high-sugar diet, we find that the fruit flies’ dopaminergic neurons are less active, because the [sugary] intake decreases the intensity of the sweetness signal that comes from the mouth.

“Animals use this feedback from dopamine to make predictions about how rewarding or filling a food will be.

“In the high-sugar diet flies, this process was broken.

“They got less dopamine neuron activation and so ended up eating more than they needed, which over time makes them gain weight.” The team also found that taking the insects off the high-sugar diet could reverse the process, restoring the dopaminergic neurons to their normal functioning level.

Dr Dus added: “We think that essentially this processing of sweetness in the dopaminergic neurons is probably used as a cue, as an alarm to tell the brain to start slowing down.

“If that process is not there any more, then you have to wait for other cues to tell you that you’re full.

“By that time, you’ve already eaten a lot of cookies.”

The findings of the research were published in the journal Nature Communications.