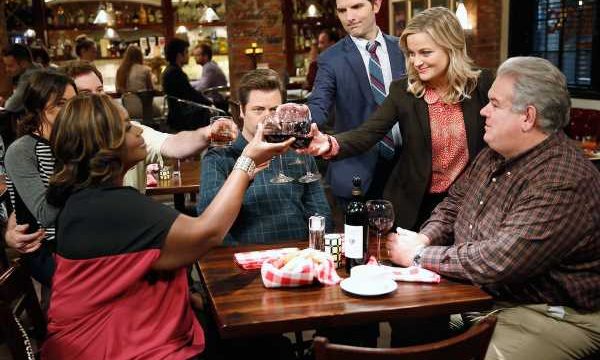 Although it’s been years since NBC’s beloved Parks and Recreation came to an end—and we had to say goodbye to our imagined best friends like Leslie Knope, Donna Meagle, and Ron Swanson along with it—one Chicago bar is bringing the quirky series back to life. Starting August 30, Replay Lincoln Park, which is known for its themed pop-ups, is turning into a mini version of Pawnee, Indiana. There will be photo ops at “iconic Pawnee destinations” including the Department of Parks and Recreation, Andy’s shoe shine stand, the Eagleton fence, the Pit by Ann’s house, the World’s Smallest Park (aka, the scene where Ben and Leslie finally got together for good), and Li’l Sebastian’s stable—supposedly, Li’l Sebastian himself will even make an appearance at The Harvest Festival. (Hopefully he doesn’t get lost in the corn maze this time.)

Lest you get to a Ron Swanson-level of hungry, Replay has also partnered with local Zizi's Cafe to create special dishes for the event, inspired by The Glitter Factory, JJ’s Diner, and Sweetums. Guests can chow down on “The Paunch Burger, Paunch Chili Cheese Fries, Waffles with Whipped Cream, and Treat Yo Self Cakes,” plus a bacon and eggs breakfast buffet from The Glittery Factory. For drinks, there’s “Give Me All the Bacon” (definitely Ron-approved), which is a bacon-infused bourbon and maple syrup old-fashioned; a spiked lemonade called “Treat Yo Self” with Luardo Maraschino and Tito’s vodka; and “Galentine’s Day,” with passion fruit orange juice and Champagne. Of course, Leslie Knope has her own cocktail, which is appropriately made with whipped cream and topped with a waffle, while “The Tammy 2”—drink at your own risk—is made with frozen rosé and vodka. There’s a “Snake Juice” cocktail too (again, drink at your own risk), which has mystery ingredients, plus a Ron Swanson drink and a cocktail based on “The Reasonabilist’s Nectar of a Thought Sorrows.”

After you’ve fueled up, there are plenty of other Parks & Rec activities you can enjoy—how does a live Mouse Rat concert sound? Or the opportunity to finally see the elusive Duke Silver play his tenor sax? “Treat Yo Self Day” will also be a thing, where guests can have the opportunity “to pamper and indulge in the most extravagant whims.” However, if you’re in the mood for something more-low key, keep an eye out for themed trivia and bingo, which will happen over the duration of the pop-up.

For interested super fans, the Parks and Recreation pop-up at Replay Lincoln Park doesn't have an official end date yet, so visit while you can. Previous pop-ups at the bar have included The Office, which featured a Dundies awards ceremony, and a Paddy’s Pub takeover from It’s Always Sunny in Philadelphia; more recently, Replay also paid homage to the final season of Game of Thrones with an on-site Iron Throne, and even recreated the disastrous Fyre Festival, decorating the bar with palm trees, relief tents, and beach chairs. Food-wise? They served the infamous cheese sandwiches, of course.