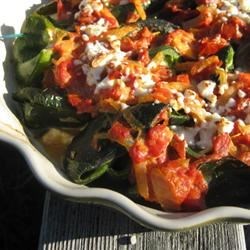 "This is my adaptation of a chiles rellenos potluck recipe a friend described to me–so far everyone loves it.It can take some time to make, but it’s worth it! Cotija cheese is a salty, hard cheese available in the Hispanic section of many grocery stores.It is similar to feta which could be used as a substitute in this recipe. But cotija is getting easier to find and makes this recipe more authentic!"