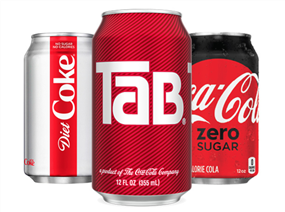 Out with the old, in with the new. The Coca-Cola Company announced in a Friday news dump that it would be retiring its first-ever “diet” soft drink by Dec. 31. Tab, as ’80s kids know, paved the way for Diet Coke to become the top no-calorie sparkling brand in the U.S.
When Tab hit the market in 1963, it was originally marketed to women. The zero-calorie soda rose to cultural prominence in the ’80s, and it maintained a cult following for decades. An energy drink under the Tab logo was launched in 2006.
“We’re forever grateful to Tab for paving the way for the diets and lights category, and to the legion of Tab lovers who have embraced the brand for nearly six decades,” Kerri Kopp, the group director for Diet Coke at Coca-Cola North America, said in a news release. “If not for Tab, we wouldn’t have Diet Coke or Coke Zero Sugar. Tab did its job.”
Kopp said retiring Tab products would clear the way for more investment in a “one-two punch with a pair of complementary, powerhouse brands.” Beyond Diet Coke, Coca-Cola Zero Sugar is the leading growth engine for the no-calorie sparkling category.
Tab isn’t the only product being axed by Coca-Cola. The company is also phasing out Coca-Cola Life, Diet Coke Feisty Cherry, Odwalla (announced in July), and Zico Coconut Water. Kuat (Brazil) and Vegitabeta (Japan) are two products from abroad leaving its international portfolio.
Source: Read Full Article