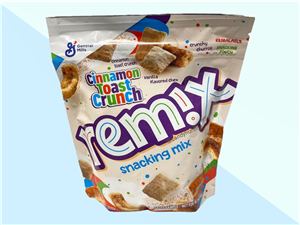 Admit it: if you’d never heard anything about sugary cereals like Cinnamon Toast Crunch, you might guess that they function as a snack or even a dessert rather than something people routinely feed their children for breakfast.

Of course, there’s no law stopping you from eating those sorts of cereals after the sun goes down, but it now looks like General Mills is making a concerted effort to repackage—or remix—its popular breakfast cereals for all-day snacking.

That comes via the introduction of a line of Remix snacking mixes from the cereal brand, combining some of its most popular cereals like Cinnamon Toast Crunch, Golden Grahams S’Mores and Chocolate Toast Crunch with other ingredients to make them even more snackable than ever.

New Remix Snacking Mixes from General Mills are expected to launch in a few months! Right now they are being sent to grocery stores as samples and not for sale. There are three varieties: Cinnamon Toast Crunch, Golden Grahams S'mores, and Chocolate Toast Crunch.

Because General Mills has its hands in so many different snackable products, you’re getting more than just the cereal you already know and love in a resealable snacking pouch. For example, Cinnamon Toast Crunch remix will also feature vanilla-flavored Chex pieces, as well as bits of crunchy churros that feel true to the namesake cereal. Golden Grahams smores will combine Golden Grahams with both Cocoa Puffs and real marshmallows, making the snack a perfect substitute for all the smores you missed out on making around the campfire this summer. Finally, Chocolate Cinnamon Toast crunch gets those vanilla-flavored Chex (to restore a sense of balance I suppose), alongside some tasty-looking caramel corn.

While we all probably want to funnel these cereal remixes into our mouth ASAP, the caption from @CandyHunting suggests we may have to wait a few months before they hit stores. Soon enough, however, it looks like boxes of breakfast cereal (at least those made by General Mills) could be confined to breakfast once and for all.